Stop Playing Games … Its OK to call him! 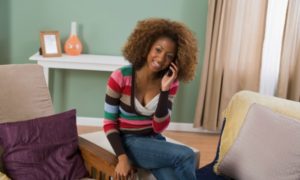 This is gonna be a quickie, but its a follow up to some comments I received yesterday. Talking about the phone call importance below.

This is an old topic, and I’m going to have to revisit in detail.  For all of my life, I have heard girls talk about this.  I’ve heard the “don’t call him … you’ll give him too much power” to “you can’t act like you like him … he’ll lose all interest” to the ludicrous “Girl … ignore all his calls, don’t talk to him when u see him, and curse his momma out … that’s the way to get them”.

Come on!  I will admit there is something sickingly irresistible about a challenge and few people want things to come too easy.  BUT … as with almost everything else … it’s a thin line that must be walked.  Sometimes females are so obsessed with not showing they like a guy, he has no idea that she may like him, and may get tired and move on.  Some do it right, but some are in their 20’s making me relive high school.

Personally, most of the girls I have really liked have not been afraid to call.  I am really bad with calling, even when I really really like somebody.  Someone who isn’t afraid to call me gets SO many points.  It shows your serious, means you’re not playing games, and if it makes sure u earn a fair chance.

See Also:  Its My Perrogative: Let a man want what he wants!

But … I’ll admit, it can be overdone.  One person thought 4 phone calls a day was a good idea.  And would continue this day after day.  And all of the calls were getting ignored at some point.  Don’t be like her.

Someone else though would hit me up to see how I was doing about twice a week.  I had been bad with keeping in touch, but I did enjoy conversation with her.  It ended up turning into a pretty serious (although now defunct) situation.

Lastly, there is email and other forms of communication.  Don’t be scared to show a little interest by communicating … its Ok.

As I promised, I will have to follow up with a more in-depth analysis.  This time it was mainly calling…Mainly about the phone call importance. But I ask:

Is it good for a woman to call a man she is interested in, or must she wait until the end of time and not “give in”?

tags: Dating Men phone rules of communication Women
previous The Essence: Female Swagger ... How to attract a Man
next He's Not in Love ... He's a PIMP: The Truth of Ignorant Females