He’s Not in Love … He’s a PIMP: The Truth of Ignorant Females 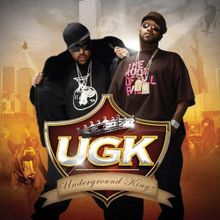 “I show you shit you never seen, the Seven Wonders of the World
And I can make you the eighth if you wanna be my girl
When I say my girl I don’t mean my woman, that ain’t my style
Need a real street stalker (stalker) to walk a green mile …
I’m a million dollar mack that need a billion dollar bitch
Put my pimp in your life, watch ya daddy get rich”
— Bun B of UGK (International Player’s Anthem)

Here are the full lyrics

You would be surprised how many girls I have had to play this line for (chopped & screwed version of course) because they were “confused” (read: ignorant) about the song.  They listened to the intro verse, heard the sweet chorus of “I choose you”, and figured they had heard enough to tell that this song a love ballad about choosing your soulmate.  They all told me how they loved this “sweet” song and was glad Down South rappers could put out something so touching.

The two verses by UGK give explicit tales of getting girls to literally sell their body for them, their recruitment methods, and the great things they can buy with the money earned.  The last verse, by Big Boi of Outkast, at one point talks about putting someone’s Baby’s Mama on a rocket to the moon, because he is paying too much child support, and the evils of getting a girl pregnant.  Some love ballad …

So what’s the point of all this?  Why take time to reveal the true message behind some song that is often ill-interpreted?  Its a great analogy.

So many girls are willing to ignore blatant signs of being played.  Spotting a player is not hard (The Howto guide is coming soon for you ladies), and often you know and see the blatant signs early. So why  fool yourself into believing what you “want” instead of what you “know”? It boggles the mind.

Well, I guess I can’t complain.  This fact has helped me out in a few situations (I’m really no player though … I swear) and has helped the honesty become a lot more popular.  And because of the nature of this post, its not going to change anything.  Your going to read this, leave a comment about how “that never happens to me.  I’m smarter than that!” … and then your going to become another statistic.

Anyone willing to come forth and confess to ignoring the truth in their life?  Anyone still prospering off this simple fact?