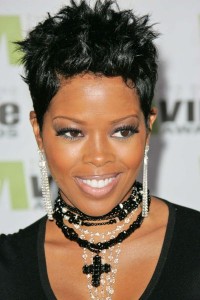 I responded to an reader submission before where a young lady was upset at the person she was dating, who didn’t approve of her change in hairstyle.  Initially it was long and straight, and she decided to keep it natural and curly.  The ensuing problems were interesting, but we already talked about that.  The thing that really stood out to me about the email was the last sentence …

I didn’t think hair was that serious for men

Now … those of you who really know me know that I am not a very shallow person.  But … holds major weight when judging woman.  Bad hair can knock a dime to a nickel or take a possible butta-face and turn her into something you might actually want to take out in public.  Hair can work miracles.

Have you ever seen those movies or sitcoms where they take a nerdy girl and turn her into a stunner.  They only do three things to bring about this complete transformation …

1. Take off glasses.
2. Let hair fall to shoulders (they always have silky straight hair … but its always in a ponytail).

Thats it!  Hairstyle instantly turns the boring girl who you might cheat off of into the girl your passing notes to trying to cheat on your girlfriend with.

Lets illustrate this with a personal story.

I went to a friend’s cookout a long time ago.  There was a girl there who seemed cute, but I didn’t think much off.  As the night progressed we found ourselves arguing opposite ends of the same argument (oddly enough the topic was men and chivalry).  While I didn’t agree with her on anything, and her chill clothes and ponytail didn’t impress me … the ferocity with which she argued and the logic in her arguments activated my intelligence fetish and I found myself exchanging information with her later that night.

We chatted and texted, but I nothing seriously happened.  She was that intelligent and cool girl who was … alright.  Then one day she proposed we do sushi and since I was free … I obliged.

I came to pick her up … and she came out with what looked like hair straight out the salon.  It was short, straight, and shoulder length, but kind of fell into her eye the whole night as we talked.  Nothing special … but was doing wonders for her.  She instantly jumped 5 points in my book and soon succumbed to the full force of the Billy Dee like game (which got activated) … very much because of the way those 8 hairs fell across her face when she got into my car.

I love an extreme assortment of hair styles, but I think short and naturals are starting to win me over … and I still detest weaves.  Don’t let a girl with short hair looking good come around me … I would do some of the nastiest things to her body treat her like the queen she is.

I know I’m not the only guy who feels this way!

tags: black hair nerdy women story
previous Flavor of Love 3: Will it ever work?
next You're not that hot ...