Anyways, this post comes from FunkyBlackChick and gives a brief glance into the importance of not just oral sex … but being sexual open and “spicing things up”.

Being a self confessed “freak” myself … you know my thoughts on the subject.

I’m Here About The Blow Job

Let me set up the scenario. 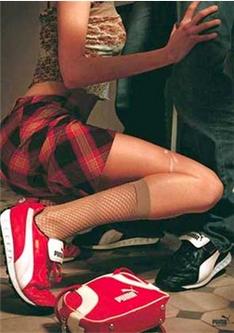 I have a friend and three years ago I introduced him to a female coworker of mine. I wouldn’t say that this particular coworker and I were close friends outside of work, but we did hang out occasionally. Throughout my moving & travelling, I always kept in touch with him over emails & random phone calls, but I lost contact with her, or received a ‘hi’ through him from her.

Yesterday, he happened to catch me online via Instant Messenger, he tells me he has some bad news. I ask him, “OK, well what is it?”.

D: It’s your girl, yo.
Me: What about her?
D: I think I might have to break it off with her?
Me: ?
D: It’s boring in the bedroom.
Me: Well have you told her this?
D: We talk about it all the time and its frustrating?
Me: So what do you mean boring?D: She doesn’t want to try new things?
Me: Ok, well a lot of women aren’t into anal? Yuck!
D: Yo, I’m not talking about that shit!
Me: Well then, what else is left to try?
D: She doesn’t like BJs!
Me: Whoaaaaaa! Are you serious?
D: We’ve been together for three years, and she’s never done it to me! So I’ve recently stopped going down on her!
Me: Wow…well yall just need to talk about it..and I don’t think this is something you should break up with someone over.
D: She’s a germ-a-phobe! She even makes me take a shower before. No spontaneity at all!

I’m not going to get into the whole convo, but my thing is, how important is a BJ? I told him maybe she’s saving that aspect of sex for marriage or maybe she’s had a bad experience. Also, I asked him if he dealt with it for 3 years, then what’s making it more of an issue now?

See Also:  Why Is Halle Berry Crazy, But Steve Harvey Is A Relationship Guru

So, if you were in this situation….What would you do? Do you leave a relationship because your partner doesn’t partake in Oral sex? Feel free to chime in (that goes for the lurkers as well).