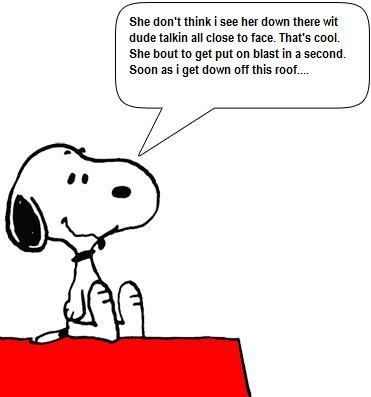 I don’t like being cheated on. I don’t think anybody does. Though if you do like it, then oral sex it prolly really isn’t cheating. As for the rest of us, we try to screen people out prior to dating ’em if we think they’re gonna be the sketchy and shady type. And generally if we get a bad vibe or a feeling that something’s not right with our significant other, we’ll make some type of effort to find out what the deal is. Chances are if you haven’t been cheated on, you know somebody who has and can tell you the signs. If you’ve been lucky enough to miss out on either of those, you’ve prolly read some type of list in a magazine or on some homepage about signs that your S.O. has forgot the meaning of fidelity. So what happens when you do see some of those signs that the person could be dipping/being dipped into by someone else? At what point is it okay to start snoopin’?

This is one of those topics that always ends up with the answer bein’ something about maturity and insecurity. As simple as some would like to make it, it’s not. Worryin’ about whether your S.O. is sliding off is stressful. Being stoic and nonchalant about what the person is doing or being on that “I don’t care what he/she do.” tip is cool, but I know people who were super stoic and ended up going nuts when they did find out they were the victim of cheating. I also know people who have went nuts tryna figure out if the S.O. was cheating and the person really wasn’t doin’ anything shady at all.

So if you think the person is cheating, just ask them or break up with them. It’s that simple Slim.

See Also:  5 Things Men Do that Women Hate, but Tolerate Because They Care

No it’s not and you know it. Don’t be Debbie Downer.

I’ve looked through phones. I’ve been through AIM convo logs. I’ve caught shorty out there lookin greaze. Did the relationship end? Yep. Did I have to use GPS to find out where she was? Nope. Did I feel better once I caught her out there and embarrassed the sh*t out of her? Definitely! Nope. I’d rather have been wrong, but at least I didn’t become “that guy” who lived in the dark and was forced to eat sloppy seconds day in and day out for months.

Fortunately/unfortunately, on the limited occasions I’ve snooped for info I’ve been right. Since then I’ve refined my search criteria and don’t plan on ever having to deal with that type of BS ever again. I’ve also been snooped on…when I wasn’t doing anything at all. Found all my email accounts and social media sites logged into, messages read, phone numbers written down out of my phone, condoms counted, everything. The person went through all that and found nothin’…and got embarrassed in the process. So what happened? The relationship(s) ended. Same result. No crime.

It seems like snooping is a lose-lose situation no matter how you look at it, and sometimes you just feel like you gotta do it before you go throwin’ the relationship away. But once you open that door, it’s a free fall ’til you find sumthin’ that proves you right or you have an epiphany in which you realize you’re bein’ extra. Or, you go nuts and get committed to an asylum.

So SBM fam, when is it okay to snoop? Do you think this really just boils down to insecurity and maturity? Anybody ever been on the tv show Cheaters? I hope not. But if so, do tell.

tags: breaking up cheating Relationships Slim Jackson snooping
previous America's Online Love
next Can I Get That In Writing