How to Become a Man’s Best Friend 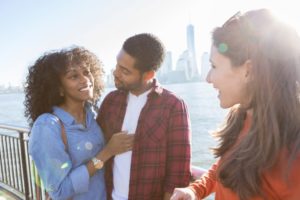 Since we’re on a roll with blog entries, I figured I’d continue in style and attack a topic very close to the heart of many women/girls..the decent looking female that has a lot of close guy friends. You know who I’m talkin’ about. Don’t kid yourself, ladies! You know who she is because you are her or you don’t like her. She’s the chick who happens to be close friends with ya man or the dude you’ve been chasing that won’t take notice of your efforts. She’s successfully cracked the passcode that has allowed her to almost become “one of the fellas”. Regardless of which side you’re on, this can be extremely frustrating. I’ve heard both sides of the table. I’ve read quite an amazing blog entry that explains the cunning “good friend” that lurks in the shadows waiting to lay claim to her throne. Have mercy should the female be more than a 6.5 on the attractive scale. I chose that number arbitrarily by the way and I chose to become the best friend of my man.

The fact of the matter remains that she is either perceived as a great friend or the worst enemy. Yes, she has other female friends that like her and understand why she has the male friends she does. Chances are a lot of women don’t like her friends either. Then again, do any women more than 1 degree of separation apart like each other initially? Most likely not.

Now I’m not disputing that there aren’t women that are drippin’ with greeze. It’s obvious in many a movie and a many a story that has been told. It’s no secret that women possess a certain level of calculated cold-heartedness that is borderline scary. How do you distinguish between the heroes and the villains? Quite honestly, I’m not sure that you can.

See Also:  When Dating Is Like Picking Your Poison

There’s a saying to the effect of “Keep your friends close. Keep your enemies even closer.” Now it does suck to have to assume that other women are automatically enemies and that you must be nice to them for shady reasons. I parallel this with any other competition for limited resources, especially if it rings true that “there aren’t that many good guys out there.” I know that I’m a good dude. All the writers here are some of the most amazing individuals on earth (lettin off that e-swagger). Why wouldn’t we have a nice mix of female friends? That probably means our phones will ring at inopportune times while we’re with our boos and we’ll be forced to explain ourselves and calm shorty down as we recite “Relax, she’s just a friend.”

Rather than be angry at another woman you barely know and keep tabs on her Facebook, Myspace, or Black Planet (yes, Black Planet) page, you should focus on cracking that code. After all, men are simple creatures. We often live to eat, sleep, beat, skeet, then sleep some more. I know that’s abrasive and raunchy and everything else that’s wrong, but unfortunately and fortunately it’s true. With that being said, you can become that best friend, or at least move up the ladder a few rungs. Some of you will use this advice as knowledge to unleash your true evil potential. Please don’t. I know you will do it anyway.

To summarize, you can become the best friend of a man if you’re not already and even you can date that friend. There are some sacrifices that need to be made for the greater good. Stop worrying about what other women are doing. Because if you are doing everything in your power to be a good friend to your guy/the guy you ‘ve been pursuing, you shouldn’t have to spend your time angry at other chicks. I could list some other suggestions, but I’m curious to see what everybody thinks of these. Feedback is crucial! The floor is open for discussion…

Truly Believing Friendship is Essential to the Soul,

tags: Advice friendship Relationships Slim Jackson
previous Time ... is NOT on my side
next Meet the Parents