How Soon is Too Soon? 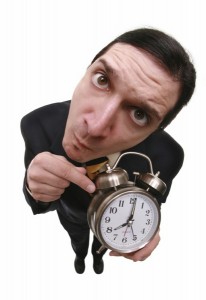 Timing is everything. It can be the key to a good joke. It can be the key to a greezy guy catchin’ a chick at a vulnerable moment and adding a notch to his belt. It can be the key to a woman catchin’ a chick slippin’ and then stealin’ her man. Timing plays a role in a lot of things. With that said, I was having a debate recently with a couple of friends regarding pre and post relationship dynamics. We weren’t talkin’ about how to destroy anything that’s a reminder of the Ex or aggressive courting tactics. We were debating something that I’ve personally debated 20+ times and can never seem to come to an agreement if the conversation is happening with more than 1 woman. One simple question applies before gettin’ into the relationship and some length of time afterwards…

How soon is too soon?

When we meet someone and we”re considering the possibility of a relationship, there’s a variety of formulas and theories that men and women use to judge the implications of having sex after the 1st, 2nd, or 3rd date. Most of the men I know would gladly accept the opportunity to go deep if they received verbal or non-verbal cues that indicated that “tonight can be the night”. I know quite a few women who are equally as comfortable with getting down to get down after hangin’ out with a guy 1 or 2 times. Then again, if women know within 5 minutes or less that they’re gonna be open to havin’ sex with a guy, why not just get down to business since it’s gonna happen anyway as long as he doesn’t drop the ball?

See Also:  She Smashed The Homie!

Personally, if I’m in the initial courting phase with a woman and she let’s me thronx her down after like 2 or 3 chill sessions, she’s decreased the likelihood that we’ll be anything more than sex and good times. I’d be laying there satisfied with my performance afterward wondering if she usually gets a dose of Vitamin D from a new pharmacy that soon. I also subscribe to the belief that if you start with sex you end up having to work in reverse just to get to the relationship phase. If I already know what the walls are like after a couple weeks, it’s gonna be a little awkward tryin’ to get to know her as a person when I already know what she looks like under those clothes and between the sheets. Do I think an early romp makes her a hoe? No. Besides, that’s a post we already did. Do I have a specific amount of time in mind that lessens the likelihood of me moving her to the PGF status? Sorta. It’s really a case by case basis.

So let’s say I ended up dating the person and we eventually met our relationship demise for some reason other than cheating. Some people say that as soon as the relationship ends, it’s fair game for newly Ex’s to go eff whoever they want. This debate never ceases to entertain me when I’m having it with multiple women. Here are a couple of common responses that I get when I say that there needs to be some sort of grace/respect period assumin’ things didn’t end way before the official separation:

Where’s the respect? And yes, I do think this should go both ways. I know that a lot of men will quickly be out there in the clubs on the prowl after a break up. It’s common, but I don’t necessarily think that it’s right. I’ve broken up with a chick before and then within 2 weeks word got back to me that she was gettin’ the pumpington by some hood dude with seeds. I was angry. I felt disrespected. Yeah, we broke up. But damn. You couldn’t keep ya legs closed for 2 weeks? Was the time that I invested in your needy ass really that insignificant? Then I called one of her former friends and gave her the business in my Altima. Just kidding.

What do I think is an acceptable time frame after a break up to get some new thunder pumps? I really can’t say a direct number. Again, it’s a case by case basis. If a person is anxiously waitin’ for a specific amount of time to go by before they can get D’ed up or D someone up, then…well…your relationship really must’ve been a mistake.

So how do you handle the pre-relationship and post-relationship sex question? Do you have a formula that determines your actions and do you have an expectation for those that you’re having or were having relations with? Let’s battle this out.

See Also:  The Thing About Break Up Sex

tags: how long to wait after the breakup how soon is too soon love Relationships S*x
previous Looking for the ... BEST ... advice!
next Fallin' Off