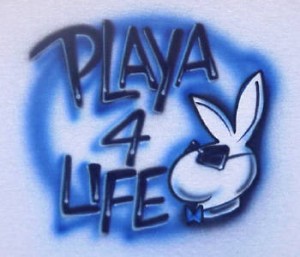 Ms. Give Me A Man: “SBM, I just don’ get it.”
SBM: “What has you confused now? Which one of the world’s ills are causing you strife and grief in your life?”
MGMAM: “SBM, you know I’m like the perfect girl for almost any guy.”
SBM: *sits and thinks hard for a second* “I hate to admit it … but yes. Hell, I would be all over you if our situation wasn’t so well established already”
MGMAM: “I know. I see you looking at my a$$ all the time”
SBM: *silence*
MGMAM: “Anyways, so the guy I’ve been dating for 4 months just won’t make me his. You’ve met him and you know I’m actually not one of those crazy chics who thinks he likes them, but are just getting played (a lot of women BTW).”
SBM: “Well, my dear friend, what does he say?”
MGMAM: “He doesn’t want a relationship.”
SBM: “You think maybe … he doesn’t want a relationship.”
MGMAM: “Maybe … but its me! I change minds”
SBM: “Silly rabbit …”

Many women have been raised with the belief that everyman can be broken. There is no lifetime bachelor, and that when the right women comes along … they will break.  Every player will retire his cane, and every pimp will put down their pimp cup for someone.  And you know what … 85% of the time your right.

Most guys want a woman at some point.  We all get tired of smashing girls with reckless abandonment and endless one night stands “doing me” and you want some regular p***y someone to hold us down.

But … as with everything in life … nothing applies to everybody at every time.

At any point in time, a guy who desires to be single can be one of two … and only two different types of “single”.

Personally, when I donned the SBM moniker, I was #1.  At the time, I wanted to be single, I wasn’t trying to be bunned, and I was happy thinking about only me.  That’s all changed … but … I’m not a career bachelor.

There are several good reasons why a man would want to be single, whether for now, or forever.  And as I strive to educate and all of these lovely female readers (oooh … you so sexy) I will now present: SBM’s list of reasons “he” wants to be single

Some people can only think of themselves.  And while we should all remember ourselves and become no one’s door mat … some motherf*ckers are just selfish bastards adn b*tches.  At least he is caring enough to know that he can’t give a woman what she wants, so he is willing to take himself out of the relationship pool.  Enough divorces out there anyway, right?

See Also:  Where Are All The Good Men Hiding At?

He’s got things he needs to accomplish

Women love to call BS on this, but their the selfish b*tches mentioned before misguided souls.  The fact is, us men thing different. We are the providers, except for broke Tyrone who never pays rent, and a lot of us want to get things with our education and career right before we start caring for another person. SBM 100% co-signs this reason!

Maybe his first girlfriend cheated on him with his brother. Maybe he saw the “women are evil” math proof and took it to heart.  Maybe he had an Antoine Fisher type child molestation situation.  Maybe he’s just seen the cold, evil black goo in too many circumstance … by too many women.  Whatever it is, he doesn’t trust em, he’s not gonna trust you … let the man be single.

He is addicted to the poom poom

See Also:  3 Things Men Get Wrong with Women That We Need to Stop

So, for all the fine (and I do mean fine) women of the SBM family, let these people go. If he says he wants to be single, give him one solid chance to change his mind … then move one.  Maybe its you, but it really could just be him.  I’m sorry, but even your golden cooch that is more pleasurable than a million black presidents getting inagurated in a million countries, at the same time … he still might not wife you.  And that’s some good cooch there … go find someone deserving!

I know I missed a couple reasons, wanna help me out? Is there one single kryptonite that can disarm any would be “Jerome” (Playa … from the Himilayas!!!)?

– SBM … aka … Reformed Pimp Ship Commander … aka … Ne-Yo is whack for that line and don’t let me catch his happy dancing behind in the streets ..

P.S.: MGMAM is made up … you know I wouldn’t let any girl walk around thinking she was perfect … and if she was … she would be mine already.