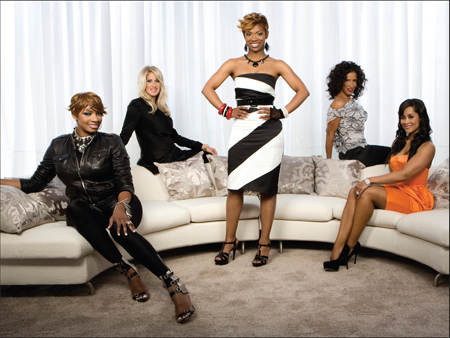 This past weekend I took some time out of my less than hectic schedule to sit down and watch Real Housewives of Atlanta (RHOA). I’ve been hearin’ a lot about this show on Twitter and in casual conversations with predominantly Black women. I really didn’t understand what the big deal was…until I sat down and caught 4-5 episodes. The show is a helluva lot better than Tiny and Toya, which I was only able to stomach about 10 minutes of before I felt my IQ plummet. Actually, I don’t even think the 2 shows are in the same league. I almost started to take the name “Tiny and Toya” and its BET f*ckery out of this post, but I figured mentionin’ it would make people feel some sort of way. Anyhow, I came to a conclusion after 4 hours of RHOA:

It’s a pretty effin’ good show, but I hate the reasons that I enjoyed it.

I consider myself a pretty intellectual individual. I don’t mean sittin’ down with a calculus book for fun or sippin’ tea and eatin’ crumpets while chattin’ with Skip Gates. I mean that I like to have my mind and other parts stimulated and that if I sit down to watch a show for hours that it’s goin’ to have some redeeming value. Even with a show like 24 or The Wire, I could admire how the writers put together each episode. This isn’t necessarily sumthin’ that I’ve been able to do with reality television. Quite honestly, I haven’t really been into reality tv since like Real World and Road Rules like 8 years ago. I watched a little bit of Flavor of Love because I was intrigued by the ignorance. I think I partially fell into the trap of watchin’ RHOA for the same reasons.

See Also:  Women Are Right: Men are the New Ball and Chain

Maybe the genius of this show is what happens when all these characters come together. Perhaps it’s the fact that it’s always interestin’ to see a room full of bold women who all think they’re fly and have goods (Whatever they may be) to flaunt. We know that sparks are gonna fly at some point. In the case of this show, they’re not competing for a man or a dream job. They’re competin’ for the camera. I could give 2 sh*ts who they’re married to or how they came across money. I just wanna see what type of ignorance and recklessness is gonna happen next. I’m still tryin’ to figure out if I’ve compromised my IQ by watchin’ for as long as I did. I guess I’ll see the results over the next few weeks. Come to think of it, I answered a lot of the questions I had about this show in writin’ this out. I guess this ish really is therapy sometimes.

See Also:  A Few Relationship Truths You Need to Know

I’m guessin’ that most of the people who visit this site have heard of or watch the show. What are your thoughts? Is it pure ignorance? Is it mind-stimulating goodness? What do you think of the different characters/personalities? I’m curious.