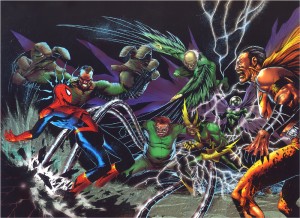 **** Admin Note ****
If you think Streetz is funny, enlightening, and entertaining on the site … you should see him cut up on twitter.

Follow Streetz, Dr. J, Slim Jackson and your boy SBM (we’re trying to convince RCLS that twitter is the truth) on the follow us page. You know you want to …

One good thing about Single Black Male is that our cast of writers have the ability to think outside the box. We present age old arguments and dilemmas in a fresh and updated light for our readers, in order to adjust and relate to current times. I’m heavily influenced by sports, literature, pop culture, and other aspects of society, and love to showcase said influences in my articles. I love comics and anime, and my favorite superhero Spider-Man and his mythos has inspired a certain culture of accountability and realism. Over the next few weeks, I will showcase different aspects of his mythos and teachings (as fictitious stories serve as allegory’s to society culture) in order to better convey my message.

The next aspect of the Spider-Man mythos that I will delve into is the Sinister Six. The Sinister 6 is comprised of some of Spider-Man’s deadliest foes, who decided to band together to kill Spidey after they caught numerous losses as individuals. They all had special abilities and intangible assets that when combined would make for an awesome team. They always came up short [||] to Spider-Man because… well that’s how it’s suppose to happen.

While this conglomerate of villains were unsuccessful in their ultimate goal, the genius is in the idea. Combining your forces with like minded individuals puts you in a better position for victory than trying to accomplish the feat on your own. We can apply this when it comes to the team which which you roll. We all have qualities and attributes as individuals which are accentuated in a group and allows for the entire team to win! I’ll use the original Sinister 6 Members to describe how apprising these roles can let the entire group live:

This is the leader and the mastermind of the group. They are the ones that coordinate the movements to the club/gathering. They are the ones that have the overall objective in mind and know which friends to deploy in order to achieve victory. Think Mike the Situation from Jersey Shore. Say what you want, but that man was focused and always put his team in a position to score!

The Wingman. The Pauly D of the group. The dude who can divert attention from an individual in order for you to win. The dude who will take a grenade here and there for the sake of the team. Think of your homegirl who suggest you go to the bar with dude #1 and intercepts dude #2 knowing that she will lose so you can win. This position should be commended and respected. Tom Cruise flyboy status:

The master of illusion. the Sultan of the #swindle. This is the Eddie Haskel/ CockRoach / Ella of the crew. They can create any alibi, background, or fictitious story in order to enhance the portfolio of the team. it’s not so much that this person is a liar… I would call them excellent public relations advocates. You need the charismatic, energetic, charming, witty, and “speak good” people to keep the flow of conversation from getting stagnant and to further set up assists from the Vulture and the Dr.  A necessary evil indeed!

The Epitome of a No Limit Soldier. Fellas already know this dude. This is the dude who will take ANY L on behalf of the team. Fat friends? Ugly friends? No problem! They want the team to win and will do what they must to complete the mission successfully. You may have abundant jokes on son, but his work in the field is admirable. I aint doin THAT isht though!!

This is the groups loose cannon. The dude who can say one corny/sarcastic/rude line to botch the evening for your crew. This is your homegirl who constantly HATES on a situation because no one other than The Sandman would want to talk to her, and even The Sandman has standards! They have overbearing personalities, but channel their energy worse than T-Mobile handles service on their network. These are the grenades that some Vultures may take for the team too. They may roll with you because their great friends, but know how to contain these individuals so you can win!

This is the person who knows which exact team to attack. They study their prey and hunt for the sport, with the spoils rightfully going to the victor. This is the guy or gal that circles the club a few times, or posts up at the bar and people watches, until they see a group of men/women who they deem “ready”. They know which one will be down for the cause, and which ones will hate. You follow their instincts because they seem to have a sixth sense for the hunt. make sure you get a good trophy too!

So are there any other integral pieces to the puzzle I overlooked. Who is the most important in this equation? What have your experiences with this phenomenon?

Thanks for coming out. We’ll leave the light on for ya!

tags: club confessions communication Laws of Attraction
previous Why I Will Never Play Matchmaker Again!
next What the eff is a Valentines Day?