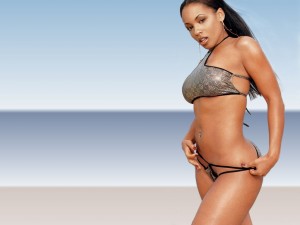 For about four months of my life I’ve been planning to attend the Urban Model Awards in Atlanta, GA. I have a friend down in Atlanta who continues to tell me that my excitement over attending this event is just a sign of the ignorance of my youth.

I have been conditioned from birth to appreciate “Urban” models. Since I was a young child there was Wreckx-N-Effect – Rumpshaker, Ain’t Nothing But a G-Thang – Snoop Dogg, Back That Thing Up – Juvenile, Big Pimpin – Jay-Z, and the list goes on of videos where you see the most stupendendous women ever known to man. (Not gonna lie, Prince had video vixens back in the 80s.)

The industry has come so far too, think back and name any of the video vixens from the 90s. You can’t name one, but I bet you know who Melyssa Ford is. When she came on the screen in the “Knock Yourself Out” video every dude stopped Harlem shaking for a second to stare. And every now and then the regular women get together and they call for artists to stop using video vixens to sell their music or make people watch their videos, and just as soon as that happens, you have somebody like Currency come and drop the “Where The Cash At” video where there is nothing but four dudes and a mansion packed full of video chicks in bikinis and champagne. So it would be wrong of me if I didn’t first admit that we know that scantily clad women piss the rest of women off.

Sounds personal to me.

Now the opposite of this would be a video vixen upset with you because you have a law degree and don’t have to be drooled over to make a buck. But the best comparison is women who like celebrities and athletes. As we’re struggling hard to find God and a paycheck, some dude who just so happens to be 6’8” and in the NBA gets all the attention in the club. And if I kept telling you how that dude was wack, unrealistic and not good representation of what a real man was, you’d probably say I was hating too.

Second, we really don’t care what you think. Honestly, I feel bad for those dudes who have to sneak on their computers and look at pictures of Buffie the Body and then delete their cache files. However, no matter what you do, men will find a way to see those women. No matter how hard you have tried no man really cares what you think about the subject. We like to see “urban” models.

Most men, spend more time looking at pictures of models like Rosa Acosta than they spend looking at their girlfriends. Rosa Acosta is the definition of perfection, right now. She has perfect breasts, abs, legs, back, and she has a great A**. And just when you thought the streets were safe enough to say something about how you have the same thing, consider this; she also has a beautiful face, long black hair, and is flexible beyond our wildest imaginations. (Somebody in the peanut gallery said, “But it’s a weave.” STOP HATING, *Prince Side Eye*) Now the reason why we’re not looking at you all the time is because you probably don’t look like this, we wish you did, but you don’t.

Please do not skip over my point about how we wish you did look like a video girl.  We know you women will be quick to inform us that you have bills to pay and work to attend and you do not have any time to be spending at the gym twice a day and beauty is not your job. And we understand that, trust us, if we could be dating Tammy Torres we wouldn’t bother you and you could go back to work, but we’re dating you. And while we’re dating you we’d like you to try. Men like a nice butt, but what they really like is a nice butt and a nice rack. We are tired of these butter face girls running up on us in the club. We are tired of these cute face straight to the waist girls with no body to match.

In conclusion, I want to say something because I know some girls in the industry; models or video vixens or whatever. And seriously, they just trying to do something they like to do and get paid for it. They can’t help that they were born that way. They really don’t spend much time thinking about shiesty women who have nothing but negativity to say. They also don’t think it’s as serious as you guys make it out to be. (Wow, this sounds eerily similar to the Light Skin vs. Dark Skin debate.) I’m saying this to say, let them live and breathe. Last I checked none of us was in charge of who got to live and die.

What’s yall think SBM fam? To my ladies, I felt like I had to keep it real today. I know a lot dudes come on here with their comments about sisters this, and sisters that, and I love my old extra regular sister, but they’re lying. They’re trying to score points with you. Can I at least get some credit for being honest with you? Dudes, forget about all that ish. List your favorite videos according to the women that were in them and let’s go back down memory lane. My personal favorite was, What These Women Want – DMX feat. Sisqo. #kanyeshrug.

tags: hating women urban models video hoes
previous They're not lying, you are a h*
next Bi-curiosity: Girls Just Want To Have Fun