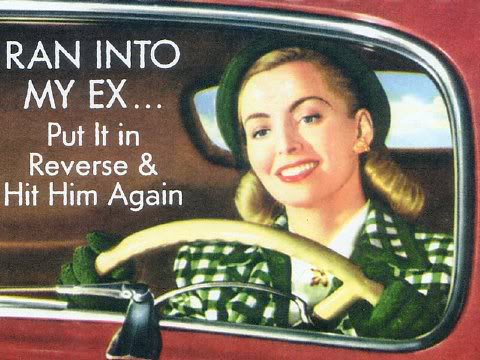 The title of today’s post is the bullsh*t line most people hear during a break up in between the other bullsh*t lines of  “It’s not you, it’s me” and “I’d rather have you as a friend than not in my life at all.”  (I just threw up in my mouth a little bit.)   Unless one of the parties in the relationship commits an unforgivable, egregious relationship ending offense (i.e. pledging Delta), there’s usually an attempt to remain friends or at least stay friendly.  After all the Carl Thomas, Mary J. and Neyo tracks have been played, can exes really be just friends?

I think to answer this question, you first have to answer the question of whether or not males and females can truly be platonic friends.  (Platonic – a friendship where one party wouldn’t f*ck the daylights out of the other party if given the opportunity).   Perhaps in college where you have a larger circle of friends that you actually kick it with, it’s more likely to have a platonic friend here or there (read: person you have not had a chance to f*ck yet).  But as time passes and your inner circle gets whittled down to a select few, it’s more likely that any folks of the opposite sex that you frequently interact with are either professional contacts,  romantic interests or a friend of a friend (read: f*cked/f*ckin’ one of your peoples).  I don’t know too many dudes that call up their 5 best girlfriends to hit the club up, unless he’s attempting some sort of Jason Kidd-esque feat.   On the other hand, there are a lot of females that do hang out with a lot of guys because they find women “catty”, but just keep in the back of your mind that 1 or more of the dudes in that group would f*ck you if given the opportunity.   So while it may be possible to be platonic friends with someone, chances are physical attraction can and more than likely will over ride the desire for a platonic friend of the opposite sex.

That brings me back to the question of exes.  As I just said, physical attraction between the sexes is undeniable.  No matter how your relationship ended, there’s no denying that there was a mutual physical attraction between you and said ex, unless you’re one of those “I love her for what’s on the inside” people.   Even then, if that’s what floats your boat, you’ll still be attracted to this person and keeping the friend door open is easy way to be constantly reminded of this fact.   My partner in crime, the High Priest of Humpday himself, Mr. Streetz Shuttlesworth actually broke this down not too long ago.  It’s real simple: unless you’re looking to get back with this person at some point, you really just can’t be friends.  Just think about your relationship with a friend, whether it be of the same sex or someone of the opposite sex that you have a platonic relationship with (read: not your ex, not someone you have or desire to f*ck). Is it really feasible to have a stress free relationship with this person?  Here’s how it breaks down….

What you want to happen: You break up with your SO and after all the tears and well wishes you guys eventually become BFF’s.  This will be one of the people you can count on in your time of need because after all, you guys have been through so much and they “get” you.  Your friendship will flourish into old age and this person will be Godparent to your child, a 3rd option babysitter, and your new SO’s friend as well.

Reality: “Let’s be friends” will be translated as “Let’s see if we can work this thing out”.   Efforts to make preserve this relationship will be made in the form texts, phonecalls, email forwards, facebooking, tweets and the occaisonal “Let’s meet up for drinks”.  Inevitably someone’s feelings will be re-kindled and an effort to jump start the relationship will be made by one party, which will be shot down by the other for whatever reason and said feelings will now be hurt.

Or…I could be wrong.  But I doubt it.

Do you think you could be friends with an ex?  Are you friends with an ex?  How’s that working out for you…?  I know a lot of you have run into this situation at least once, so holla at me.  And if you were plannin’ to call your ex to hang out this weekend…think twice.

I burn bridges then destroy your city,

tags: Dating exes friends It's not you it's me Lex Steele Relationships Rules of Engagement
previous Spider Sense - How do you know when somethings wrong?
next The side chicks revolution - 5 reasons why a mistress will never be the housewife