Home Dating & Relationships Dating The side chicks revolution – 5 reasons why a mistress will never be the housewife
Dating
February 24, 2010 Jeff J. 205 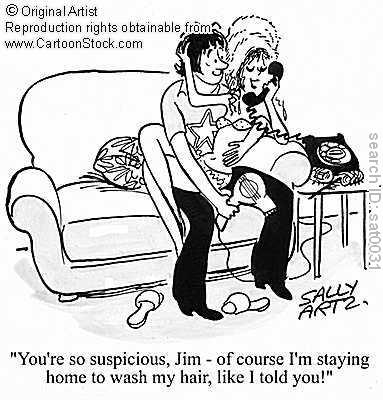 I’ve been watching the news the past few weeks, and it seems like there’s a mistress (side chicks) revolution occurring in 2010. We have entire Eldrick Woods scandal (I refuse to call him Tiger. His mama named him Eldrick, Imma name him Eldrick!). We have women posting billboards of their lovers all over NYC so that the cheating man gets put on blast. As I sit and read ridiculous article upon ridiculous article, I couldn’t help but be offended and angered by this surge of side pieces stepping to the forefront to claim their 15 minutes of fame. Just like all these rappers kicking freestyles over Exhibit C, these side pieces need to give it up and walk away promptly! To all the side pieces playing hypeman to a committed gentleman’s relationship, let me inform you that you will Never prosper!

Reasons why side chicks will never be the housewife:

You Lack The “IT” Factor

Have you ever wonder why he’s content with keeping you on the side? You ever wonder why you’re good enough for him to get some quick beats, but not good enough to be the matriarch of his household? You lack “it”. Now, I don’t know what “it” is. Most men may define “it” differently. Some people have “it”, some don’t. His Wife/GF/Main One has “it”, while you attempt to #Swindle him into thinking you are “it”. If you think you can just come into town and play Sergio Rodriguez to his girlfriends Chris Duhon, you got another thing coming (no pause).

You Think He’ll Drop The Wife/GF for Them

Somewhere within the side chicks psyche exists a fantasy world in which their love interest falls in love and leaves their current situation to be with them. Too bad 9 times out of 10 this will never be the case. For one, you are an extracurricular activity and they are cheating compared to the real-life task that is their main piece. These side chicks don’t understand that men will tell them whatever they want to hear in order to keep them happy, and sometimes these words pale in comparison to the truth. You know he lives with his boo. You know he’s married. Yet you still think he’ll leave his situation when he has the best of both worlds? C’mon SON!

See Also:  Why I Will Never Play Matchmaker Again!

After all this whistleblowing by all these secondary Heauxs, you think any man stepping out on his lady will trust you? The honor amongst thieves seems to have been lost upon you deceitful vixens in 2010, so every man is going to cross t’s dot i’s and so forth. You have gone from fantasy to liability and that doesn’t translate to the head of the pack, you may even have one foot out the door.

You aren’t the only one

What, you thought you were special? You may not even be the first option! We live in a society based off of multitasking. Consider yourself managed adequately, especially if he makes you feel uber special and doesn’t miss a beat!

You Have a False Sense Of Entitlement

These chicks want book deals, interviews, money, and the world for their pain and suffering. I knew things were out of order when I heard that a couple of Eldrick’s side pieces DEMANDED a public apology. Demanded?! Are you serious? You founding members of Jumpoff Incorporated can get an apology when you hold a press conference and apologize to Eldrick’s WIFE AND CHILDREN!! Stop it, PLEASE! You side chicks need to stay in your lane and stop swervin, because you’re going to cause major accidents. The main definition of side chicks is secondary. Supplemental. Second/Third/Fourth tier.

You are the extra biscuit a man get at Popeye’s just because he’s greedy and on his fat boy flow. You are NEITHER the 3-piece nor the side dish (because it comes with the meal). As if you are not entitled to anything but a hard dyck and bubble gum. If you were looking for a come up and fell short, don’t be mad, find a better simp to expose! Gravity needs to take some type of shape and reel these women back to reality and stop the madness!

I officially declare war on all disgruntled side chicks, trying to expose men because of their false and unrealistic expectations for their relationship. #Youmad? That’s NO excuse!

Ladies, have you ever been a side chick? Did you get jealous of the Main Woman? SBM Community, please discuss and let me know if I’m way off base or if this epidemic has merit!

tags: cheating mistress swindle
previous Let's Be Friends
next Do you want to end this? ... Hell no!