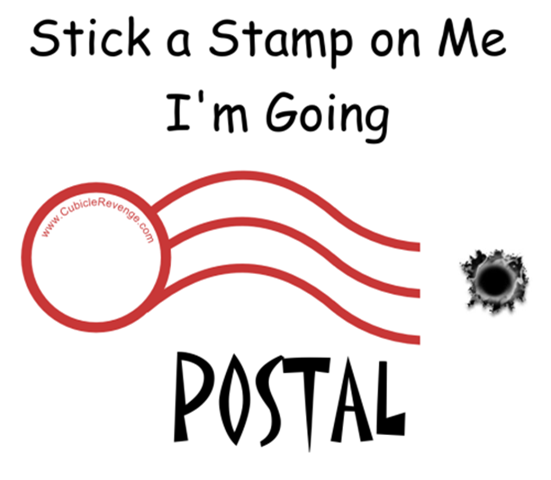 I thought about saving this story for Rantings of a SBM. Then I knew I would write a venomous soliloquy that would bring me ridicule and abundant side-eyes, Then I thought about posting the bane of my current week on Eff Em Fridays, but a recent development which pissed me off exponentially has warranted me to b*tch vent to you the SBM community, as you help me decide how to handle this current situation. It involved frustration, incompetent government and private establishments, and a decision. No this isn’t “As the Favre Turns” It’s my week long saga, appropriately titled “I’m going postal! My (•͡.  •͡┌П┐to the ENTIRE postal industry!!” It’s long, but it’s good. #TWSS

So I just return from my business trip in the biggest developed farmland in the nation Syracuse, and I noticed that 3 packages of mine were marked as delivered while I was away (tracking confirmation). So when I got home, I noticed only 2 were there. 3 confirmed packages,  only  2 here. Well that’s strange isn’t it? I figured someone in the house signed for it.

Asked my fam, they didn’t sign. Asked the landlord, she didn’t sign for it… So I ask myself “Self, where the eff is the package?” I then remembered that this item was sent through the United States Postal Service (USPS), and they have a propensity for delivering the entire towns mail to the wrong addresses.  I then ask my neighbors if they got a package for me (it’s happened before) and they say no. So, I’m sitting here with a delivery confirmation and no package. Only one step next to do

I went to the post office with all of my information and spoke with a “Miss Laura” (now I already harboured apprehension because if a “Miss Laura” is handling my mail and not a home cooked meal, it’s going to be an issue). She ran the numbers through the computer and checked the post office. The package wasn’t there and the carrier wasn’t in at the time. She told me she’d call me either Saturday or Monday when she investigates further and let me knwo the situation. So now I’m going on 3 days without a valuable item. Gotta love government offices right?

I call back on Monday because of course Miss Laura hadn’t called me back. So I speak to a gentleman who informs me that everyone has left for the day, and no one brought him up to speed on my situation, so I might as well call back tomorrow. Here’s why I’m TIGHT:

So now, I gotta wait another day…. 5 more days that I’m going without my stuff…

I call once AGAIN to rectify the situation. I get Miss Laura. We then have a “when keeping it real goes wrong” type of conversation. I explain to her that there’s no way that the sender mailed my item to the wrong address. It was confirmed as arriving in my town and delivered. If no one has it, then that means this fool delivered it to the wrong address… or kept it for self! She informs me that since the package had no insurance, the only thing left to do was for the sender to file a claim. When I asked why she doesn’t call up this carrier (who isn’t in the office again), she let’s me know the following:

This got me irate, however I couldn’t fault Miss Laura for keeping it real. I was just shocked that, essentially, postal workers can deliver your sh*t wherever, whenever, claim that they delivered it to the right house, and unless you have insurance, you’re assed out. Insurance shouldn’t even matter, because you’re still left without your item! Then she wants to talk about a UNION?! I’m sorry but there should be more consequences than that! She informed me that the carrier will be in tomorrow (as in a week from my package disappearing) and she’ll speak to him and call me.

Oh, in case you were wondering, I ordered a pair of rare kicks that haven’t been out in a while. Got a crazy deal too. Which is why if they got delivered to a teenagers home or a sneakerhead, and they opened it off GP, it’s a wrap. Do believe I’m looking at everyone in the neighborhood kicks game to see if anyone violated.

I thought to myself  “I wish son would’ve sent it UPS. This type of sh*t would’ve NEVER occurred!” Oh, what a foreshadow…

I get home from work and I see a package outside my house. No not that package, but another one I ordered from the good people at BeachBody. I actually spoke about these new supplements that I’m using in my workout log. Anyway, I wondered why it was just chillin out maxin relaxin all cool in front of my crib. It was suppose to be delivered by UPS (which it was). They NEVER leave it outside. They’ll leave the sticker and tell you when they’ll next stop by. So I bring it inside and converse with a family member who tells me they found another UPS package outside too. Have these dudes gone estupido loco?! What’s the use of sending an item UPS if you’ll just leave people’s shyt outside! Maybe it’s karma for one too many of my Iota jokes on twitter, but Brown aint do shyt for me but almost make me lose MORE stuff!!

See Also:  Oh The Weather Outside Is Frightful

As my saga continues, I warn you to get insurance on your stuff, if it’s that valuable, whether by USPS or UPS. I worked in customer service, so I feel for people on the opposite end of my situation, but EFF THAT! This situation pisses me off by the hour and could’ve easily been avoided if the carriers weren’t so lazy and irresponsible. Hopefully it turns around and I get my kicks. Stay tuned.

In closing let me provide you with a scenario: UPS isn’t suppose to leave packages like that. My mother pointed out a swindle when she told me “You can call the company and tell them you never received it and get double….if you do stuff like that!” SO I ask you, should I leave that alone, file a complaint, or hit IPhiT UPS with the swindle? Has this happened to you with agencies or customer service effing stuff up for you? How did you handle it? Y’all got any sneaker connects?

…I knew I hated Karl Malone, and for good reason…

tags: customer service swindles
previous I'm not trying to take your girlfriend!
next I'm Too Old for This Sh*t