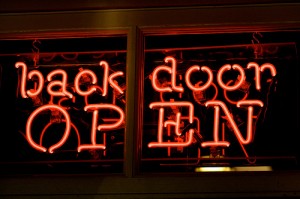 With enough persistence, a guy can talk his girl into just about anything in between the sheets.  It’s no secret that it’s not that women won’t do certain things in bed, it’s just that she has to feel comfortable with the person she’s doing it with.  The right guy can have a woman doing all kinds of nasty things she felt were taboo in the past.  They add these new tricks to their repertoires and with enough practice they can become second nature.  On the contrary, backdoor requests are not even in the question.  Not even Jesus could probably help most guys talk a woman into this…although I’m not too sure he’d even be willing throw up the ally on this one.  Most women actually have a firm backdoor policy that reads something like this:

Do not ever entertain the thought of the possibility of you coming through the back door.  In no way, shape or form is your wang, finger, or any type of “bedroom toy” ever to be in the vicinity of that orifice.  Under no circumstances should you ever misconstrue or confuse anything I say or do to mean that I wish for this type of activity to occur.  Moreover, 4 or more “wrong hole” incidents during a sexual act is sufficient grounds for termination of said sexual act.  Persistent “wrong hole” incidents are grounds for suspension and/or termination of sexual privileges.

A few moons ago I wrote a post giving the top 5 reasons why a woman should ingest man fertilizer, and I think a may have been able to get some women on the favorable side of the fence.  To be fair, there’s a hell of a lot more that could go wrong during backdoor activity than with swallowing, but f*ck it, you only live once, right?  There’s probably not five good reasons why you should try this, but I could probably give you two good ones:

If you’re already thinking about it, you might as well go for it.  You may find out it’s the thrill in life you’ve been missing, or you may decide it’s not your thing.  Either way, the issue will be resolved and your curiosity will be cured.  Think of it as at least one instance where curiosity won’t actually kill the cat. A lot of you probably won’t admit it, but behind closed doors not only do you not mind having a finger slipped back there every now and then, you actually rather enjoy it.  So stop being a chicken why not give it a shot?

If you’re a demanding woman in bed, it’s only fair you at least entertain this request if submitted.  Without giving your sex slave partner some incentive, you’ll turn sexy time into a chore instead of the excellent adventure it should be.  If he constantly gives, it’s only fair you should do a little extra taking.  A selfless partner should be rewarded, and if he really wants to try it, you might as well meet him halfway.

Many women make the argument that if it’s so much fun, maybe their man should let them try it on them.  Let’s be realistic for a second.  Besides the fact that some serious questions need be answered if that ever went down, just think about it…would you actually respect your man if he let you do that to him?  Look ladies, we know life isn’t a porno, we know you ain’t no ho, and we’re aware of the fact that it could possibly painful.  I’m definitely not advocating you try this with everybody, because after all, this is risky business…unless you got a sex tape coming out.  If you’re planning on dropping a Kardashian-esque sex tape, you may want to try something new to help you stand out.  These things are starting to get boring.  This is definitely something that you do with a trusted partner or for $1200 a scene. The reality is, you may actually give in to this request just find out that your man may not care for it that much either.  A lot of guys just want to be able to say they did it see what all the hype is about.

See Also:  "Too Freaky for Me": SBM Answers

tags: Lex Steele S*x
previous When it’s best to keep it on the LOW
next Faking the big O: 8 questions men want to ask women, but fear the answers