What makes a man commit?

**** Admin Note ****
The boy Wisdom is Misery is back to supply yet another hot blog.  Be sure to check him out at his blogging home WisdomIsMisery.com. 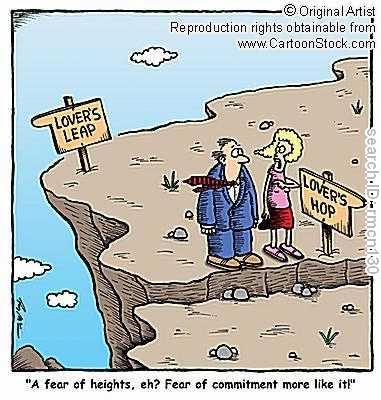 Good morning/afternoon/evening ladies and gentlemen. The last time I wrote for SBM, I talked about Why Men Don’t Commit. Naturally the question I heard most was, “So, why do men commit?” Hence today’s follow-up.

I thought about this topic for a long, long, looong time and I have concluded, I have no idea. Well, I have an idea but my response is usually not the rosy, comforting response most women are looking for. I’ll share a quote a fellow (female) blogger shared with me:

Boissuq.com: When men are ready to settle down, they go with whatever is right there at that moment. Luck of the draw…

I concur. Getting a man to commit is like getting hit by lightening, you just have to be at the right place at the right time. Word to big bird. Let me explain why.

See Also:  From A Married Man: Wifey vs. Wife: Which Are You?

This might have to do with the nature of dating. Women get approached and men approach. Therefore, women need to be more intuitive in what they want; whereas, men just have to receive reciprocity (Lauren Hill!). In layman’s terms, most men go out looking for s*x and sometimes they find a relationship along the way. Women assess relationship potential and sometimes they have s*x.

There are two additional factors:

Then there’s an addendum of things that would be nice to have, like

That’s it. If a woman has those qualities, I’m happy. Anything in addition to #1 is a BONUS to me.

On the other hand, I have women friends who have very specific criteria:

1) Must be this height

2) Have a college degree

4) Have this belief in God; and

More importantly, they wont stray from the list. It’s either all or nothing.

Factor #2) In WIM’s humble opinion, women have difficulties finding all the qualities they want in one man. Men have difficulty accepting all they want in one woman. In other words, men say they want a “lady in the streets and a freak in the sheets,” but then can’t handle this in one woman. As a result, they’ll have two (or more) women for each role. The one they can respect as a woman (the main) and the one they can respect as a freak (the side chick). Not only is this unfair to the women, it reinforces that (some) men can’t handle what they desire.

Lastly, men aren’t greatly impressed or intrigued by the college degrees and advancements in career that women bring to the table. Those things are nice, but if you’re unattractive, who cares?

I’ll end with part of a convo I had via Twitter with @DrJayJack that inspired this very blog then open this up to questions/comments. *Edited for readability:

@DrJayJack: Men will not ask their women to do something that makes him think less of her. He doesn’t want that.

@WisdomIsMisery: Yes, BUT he doesn’t often stop her either. “On my face” sounds good til you have to witness the aftermath

@WisdomIsMisery: Dudes are hypocrites. lol They have a “good girl” they can “love” (the main) then have the jumpoff 4 all the freaky ish on the side

@WisdomIsMisery: Honestly, that’s my point. You cant trust or cant handle? Basically, dudes want a ‘freak’ but then cant #man-up & commit to her.

@DrJayJack: I believe in the sanctity of a side piece or a GF you keep in a condo downtown near the office.

Ladies, what are 10 things you look for in a man? Is your list non-negotiable? Fellas, the statistics are in our favor *HIGH FIVE!!!* but what do you look for? Is it non-negotiable? Both, why DO men commit? Because I really don’t know other than – right place, right time?

previous Light-Skinned Girls: The Black Man's Kryptonite
next Are you ready for an open relationship? by @Maxfab