How to choose your “Dealbreakers” 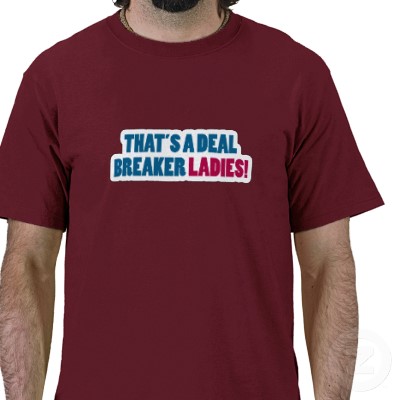 SBM: “I got a guy you might like.”
Shauna Berlinda Franklin: “I’m listening …”
SBM: “OK.  I know how picky you are and I think I dodged all of your dealbreakers.”
S.B.F.: “You always say that.  Surprise me this time!”
SBM: “He’s a doctor who went to an HBCU.”
S.B.F.: “So good so far.”
SBM: “He volunteers as a basketball coach for the YMCA and played in college.”
S.B.F.: “So he isn’t short and he works out. Check and check.”
SBM: “Here is his picture.” ** hands her phone with facebook page opened**
S.B.F.: “See … there you go again.  Always getting my hopes up and then crushing them everytime!”
SBM: “You can’t be serious! What is wrong with him!?”
S.B.F.: “He’s got a bicycle in the background. You know a guy with a bicyle is a dealbreaker. How is going to have kids with his testes all mangled? ”
SBM: **sigh**

Yes … dealbreakers are a well known part of the dating vocabulary.  But for those of you who don’t know what a dealbreaker means (to me), let me clarify.

Long story short, both men and women are running around with mental checklists, disqualifying would be baby mamas and FwBs that you crazidly assume will turn into a real relationship even though he is already smashing without an demands on his time or sanity as they meet one of the dreaded “dealbreakers”.

The fact is, there is a problem.  Too many people have let their lists get away from them.  Lists are way too long and include things that aren’t dealbreaker … but preferences.

Preference – A characteristic that you want in your ideal significant other.  BUT, realizing that no one is perfect, trade-offs are made, things are swapped around (e.g. she has no breasts … but ass for days), and somethings are relaxed (e.g. 5’11” is pretty close to 6’0″).

See Also:  Can You Sleep With Someone Else While On A Break?

People are running around mistaking dealbreakers for preferences and this is making dating a lot harder for a lot of people.

Basically, there are a lot of things that you would like to have or like to avoid, but it’s not a real dealbreaker.  Realistically, it doesn’t (or maybe shouldn’t) disqualify this person from your dating pool.  It hurts them and takes away a point or two … but you at least need to give them a chance to get over this one “ding”.

Simple … keep your “dealbreaker” list small.  At MAX, you should have 5, but really all you need is 3.  Yes … all you need is a list of 3 dealbreakers (and infinite preferences) to be happy.  And you don’t have to count the basics … because there is a lot of stuff that no one wants (shouldn’t beat on me, shouldn’t be selling drugs, shouldn’t cheat on me).

See Also:  No Wifing in the Club, Gimme 20 Dollars

As an example, here is a an old SBM Dealbreaker list

The preference list was actually a mathematical model based on something like 500 individual characteristics, but what can I say … I was a picky and nerdy over-thinking motherf*er.

So take a stab at it.  Can you distill your list of dealbreakers down to 3-5?  Do you really need more than that (why the f* are you special)?

previous Breaking News: Men Are Always Looking for Serious Relationships
next Researching Your Date: How Much Is Too Much?