Being Cruel to be Kind 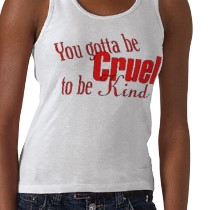 It’s probably not a good idea as a relationship blogger to admit this, but there are a few things I just don’t get about men. Why they lie about the dumbest things, why they seem to love crazy girls, and why they always come slithering out of their holes after they’ve left you. But if there’s one thing I do know about men it’s this: they don’t like to feel like as$holes.

Men will do all manner of dumb and hurtful shyt in order to avoid this feeling of as$hole-ness. Which of course just results in them being an even bigger a$shole, but they don’t get that because men don’t understand the basic concept of being cruel to be kind.  But being cruel to be kind is very simple.; it just means that sometimes you have to suck it up and do or say something a little mean for the ultimate benefit of someone else.

I can picture you all screwing up your faces at me right now so please allow me to illustrate some of the times where being an as$hole is the nice thing to do:

Sometimes we meet someone, we think we’re clicking and decide to take it a step further only to discover that this person is a no-go. It happens to the best of us and there’s nothing wrong with that. The problem is though that too many men are ending these first encounters with “I’ll call you” knowing good and damn well they will not. Now I know it makes you feel like a bad guy to end a first date with a simple “Thanks it was fun” or “Get home safely” but it really just makes things easier for all concerned. Saying “I’ll call you” when you know you have no intention of doing so just fills the woman with hope…the pathetic and desperate type of hope that is gonna make her call you when you don’t call her, or “just happen to be passing by” your favourite sports bar on Sunday. So just spare yourself the aggravation and save “I’ll call you” for circumstances in which you actually do intend to call.

2. When you don’t want to see her anymore.

I ranted about this on my blog a few times but it bears repeating because it’s a pretty common example of where some men go wrong. Many men seem to think that when they lose interest in a woman or want to break up with her, the kinder thing to do is to slowly drift out of her life without discussing it with her. Or to instantly vanish without discussing it with her. Or write her an email letting her know they’re done without discussing it with her. Notice a trend here? It seems there are a whole bunch of men roaming the earth thinking that it would be “mean” of them to tell a woman why she no longer interests him, so they just take off and leave her hanging. Yeah no. It doesn’t work that way my loves. What happens when you don’t explain things to a woman is that she wastes countless hours trying to figure out what went wrong. And if she can’t get past it she will likely take out her frustration on the next poor simp who tries to date her. So suck it up and do both the woman and your fellow man a favour – explain yourself before you bounce.

See Also:  How Much Does "Experience" Matter To You?

A wise man once told me that “a gentleman when he decides he doesn’t want to be with a woman breaks up with her and doesn’t call again”. This is a prime example of a circumstance in which a man’s “kindness” hurts a woman more than it helps her. I mean it’s not that I can’t understand the crappy feeling of knowing that someone you once or still care for is hurting because you left them, but continuing to call them “just to check on them”, entertaining their pleas for help (a woman who is trying to get a man back will always pull the “I need your help” #swindle) and throwing one in her for old time’s sake because she needs closure are all d!ck moves. They may make you feel better by soothing your guilt, but they confuse the woman and make it harder for her to get over you and move on with her life. Or maybe that’s why you do it?

I know that doing something you don’t want to do to benefit someone who you no longer want to be involved with seems backwards to men, but it really is for the greater good. For one thing, telling a woman unequivocally that you don’t want to be with her will usually shame her into no longer contacting you; therefore freeing up your phone line and email inbox for your next woman. Plus women like to talk and having a reputation as a f*ck ’em and chuck ’em without a backward glance type of man is only going to make getting new p*ssy that much harder. So do that girl and yourself a favour and be a bit of an as$hole when the situation warrants it.

See Also:  The Ex Factor: How to Pick Your Next Mate

What do you guys think? Do you see the benefit of being cruel to be kind or am I talking sh!t here?

tags: Advice Dating Laws of Attraction Men
previous How to Talk to Women and Get Anywhere: Part II
next How I Knew She Was the One