How to spot an e-Pimp 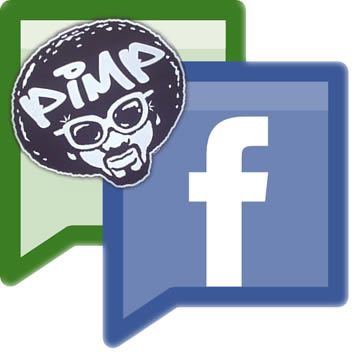 SBM: “Yo, lets go out tonight.”
Dole-Megabyte: “Naw man, can’t. I got plans.”
SBM: “Oh, forreal. What we getting into?”
DM: “It’s what I’m trying to get into tonight. I think I got something set up tonight.”
SBM: “For real? Chic from Dream last week?”
DM: “Naw, she was faking. Talking about she wasn’t trying to come over.”
SBM: “That girl from the house party you was talking about?”
DM: “Naw, I’m not messing with that chic no more.”
SBM: “Oh boy … don’t tell me … ”
DM: “Yeah, this chic I’ve been poking on facebook.  I hit her with a message and she got back to me.”
SBM: “You got to stop this e-pimping man! This is getting crazy!”
DM: “Why? I got a system that these women are loving.”
SBM: “Why don’t you come out and get your women like a real man … like me?”
DM: “I f*ck more women, and better looking girls … and they do whatever I want … whatever!”
SBM: *long pause as I try really hard to think of a rebutal* “Yeah, but still. It’s online. It doesn’t count the same.”
DM: “When you’re doing numbers like me, holla.”

e-Pimp: A “playa” whose main means of getting women is through online means.

See Also:  Are There Not Enough Black Men for Women, Or Is That Just an Excuse?

I am not hear to judge.  I know that is what I do 364 days out of the year, but I guess ever “critic” needs a break.  I cannot judge because I cannot knock an e-pimp and his e-hustle.  This individual which I chastised during my younger years, was actually a revolutionary.  He was an attractive (so I’m told because you know as a guy I am incapable of judging another man as attractive) guy with the ability to talk.  He did pull girls in real life and was perfectly capable of hitting the cub and finding a woman, but why …

You use email instead of postal mail … right?  You read news online instead of reading everything in a newspaper or magazine … right?  So why is it that online dating is so “taboo”?  I think Bun B said it best with “Pimping ain’t dead … it just moved to the Web”.

But I’m not hear to condone e-pimping either.

He’s Still using MySpace (and maybe BlackPlanet)
I don’t even remember what my name was on MySpace.  I don’t log-in, I don’t check the profile, and I think it still talks about what I plan to do when I graduate from undergrad.  There is only one real reason someone stays on MySpace these days, and that is to have access to the significantly easier women (never really knew why girls would so ready for the random nutz on MySpace over Facebook).  If your man has an active Myspace account … well …

He Spends Weekend Nights poking, superpoking, and messaging
There is nothing wrong with being active on facebook or other social networks, but when your weekends are spent chatting over facebook messenger instead of going out with people, I think the e-pimp title is yours.

Instead of The Boot Call or Boot Text … He Booty Tweets
If you see things like “#LemmeBeat” and “#ImaKnockItOutGirl” in your friends timeline, then he might be an e-pimp.  I think a lot of women were mad at the concept of the late night booty call.  More were enraged when the late night booty text became acceptable.  Now you have a few probably ready to cut someone over a public booty tweet. If only it didn’t work …

He shows you the X-rated twitpics that he gets over DM
People used to get dirty picture messasges as part of the sextign craze.  But why use up your messages for the month when twitpic will hook you up for free.  Too bad she forgot that anyone can look up her pics without a link …

These tell-tale signs will help you spot an e-pimp from afar.  But don’t be scared … he’s not doing anything wrong.  Actually, Mr. e-Pimp, I salute you for doing what I just could never do (I was always afraid of some mugly looking joint coming to my door with some lube and a rope after sending me her best friend’s pic).

Is using online dating and social networking to get women still taboo?  Is it still bad to use computers to make your life easier?  Or is the “e-pimp” a loser?