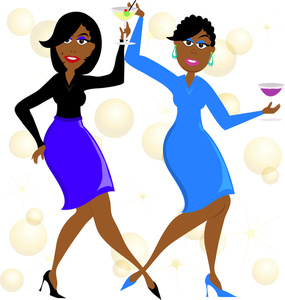 I’m sure most of you checked out the good doctor’s 2011 Brother’s New Year’s Resolutions. He gave the men some great things to keep in mind this year. But ladies, however much we don’t like to admit it, you know we have some work to do ourselves, so let’s not get left in the dust.

Stop thinking that single is a death sentence.
It’s nice to be coupled up, but it’s not worth sacrificing your integrity or pride over. Desperation to have a man so that you don’t have to be alone leads to putting up with all kinds of unnecessary bullsh!t. Which leaves you bitter and wary, which leads to you taking out your issues on the next man that comes along. Which leads to that man becoming bitter and disgruntled and taking his sh!t out on the next woman he gets with. See how your fear of being single affects everyone? Read this and then take some time to be by yourself and learn how to be fully self-sufficient. Only once you master singlehood are you really ready to be part of a couple.

Humble thyself
I’m tired of hearing ladies talking about what they would never do for a man. That is not the right attitude to have when you’re in a relationship or trying to get into one. I’m the last one to advocate lying down and letting a man drive over you, but you need to have some flexibility. You need to recognize that sometimes you will have to be the fall guy and sometimes you will have to not get what you want, or do something you thought you’d never do for the sake of your relationship. Ask yourself if you’d rather be right or have a happy home and if you choose a happy home, suck it up and be the first one to apologize once in a while. Would you rather be single or swallow some seeds every now and then?

Stop pandering
I understand that it’s hard for the so-called good woman out there. Men say they want a woman who is educated and self-sufficient and classy and whatnot but then they give all their attention to the simple b!tches in tight little dresses with no panties while you’re home alone with nothing but the rabbit to keep you company. I get it. It sucks. But this blatant ingratiation has got to stop. You can’t walk around telling men what you think they want to hear just to get them to like you. Not everyone is for everybody. Just be someone who is worthy of attention and the right attention will come to you.

Worry less about his account balance and more about your own
I know I know – how a man handles money is a good indicator of his sense of responsibility and all that. But let’s be honest ladies, for a lot of you the real reason you want a man who is financially healthy is because you either want him to support you, or you want to be dripping in diamonds and Chanel without coming out of your pocket. And while I would never fault any woman who covets such things, trust me when I tell you they’re a lot more satisfying when you pay for them yourself. And even better, if you break up he can’t ask for them back.

Learn how to dress appropriately
I’m not talking about mampy girls stuffing themselves into clothing so tight I can see their name and address. And I’m not really even talking about girls wearing short, tight and scandalous outfits in a pathetic and desperate attempt to garner attention from a man who probably isn’t even worthy of taking out your garbage. Although if you’re doing either of those things you need to cease and desist immediately. No I’m talking about the little things, the subtle things that distinguish between a live (wo)man and a fresh(wo)man.

Ladies I don’t want to see you in the club in the middle of the winter in short skirts, bare legs, and open toes (nor do I want to see you begging the bouncer for line bypass because you left your coat in the car. If you can’t afford coat check you need to stay the f*ck home). That’s not hot. You look like your style game is so weak that you can only look good in the summer time. I have two words for you: weather appropriate. Get you a well-cut pantsuit and wear it with no shirt underneath and some hawt ankle boots and there you go. Oh and also? About that Gucci Marrakech bag? I know you saved up for months to buy that. I know you’re proud of yourself. I’m proud of you too. But that is not a go-anywhere bag, you feel me? If it’s canvas and/or bigger than a breadbox it is for function, not style. So don’t let me see you in the club trying to find a place to put it down while you dance. Get a clutch. Or a wristlet. Anything that doesn’t say “I spent my rent money on this bag and I am going to take it everywhere I go so help me God”.

Embrace sisterhood
I don’t want to hear any more about how you can’t get along with women. Learn how. I’m the first to admit that men bring a lot of wonderful things to the table that women do not, but you need some balance. There’s something special that goes on when women come together in friendship and if you miss out on that you’re really missing something. And yes I know some women can be b!tchy and I’m sure you’re so gorgeous that girls hate on you for no reason and won’t let you play with their boyfriends but you know what? Not all women are like that. So find some who are not going to compete with you or be jealous of you. And while you’re at it, take a moment to consider whether the women you can’t get along with are actually jealous of you or if by chance you might be a bit of an a$$hole.

Don’t be the jackpot
When we’re in a relationship, we want our man to feel like he won the jackpot. That’s a good thing. But there’s a difference between making a man feel like he hit the jackpot and actually being the jackpot. Think about it – part of the thrill of winning at the slots is that you put a small amount of money in a hole and you get a financial reward. When you translate that into relationships, it’s putting a small amount of effort in and getting a large reward in return. So if your man is only putting a nickel in your slot, don’t give him $1,000 in return. Give him a nickel. Save your big payouts for the men who are investing significant amounts of time, effort, and energy into you.

Learn the right way to settle
Settling has a bad reputation, but there is a time and a place to do it. If you are at an age at which you believe you’re ready to settle down and still painfully single, you might want to consider settling. The good kind of settling that is. Allowing yourself to be the jump-off of a man you really want to wife is a move only I can pull off bad settling. But reconsidering some of your must-have qualities in a mate and accepting an invitation from a man who doesn’t meet all 65 of your key characteristics is good settling. Sometimes you have to give a little to get what you want. Some of your deal breakers are things that can be resolved with a little time and patience and a lot of your must-haves are actually just nice-to-haves. And let me tell you right now – taller than you is not a must-have.

Show some vulnerability
Being an independent woman is a beautiful thing. Working hard to get to the point where you don’t have to rely on anyone for anything is something you should be proud of. But also recognize the fact that humans were meant to be multi-faceted. Being the tough, no-nonsense taskmaster may have gotten you where you wanted to be professionally, but it isn’t going to do you any favours in your personal life if you don’t learn to balance it with some softness. Learn how to admit that you’re wrong. Don’t act angry when someone hurts your feelings, learn how to say “you hurt my feelings”. Acknowledge that you can’t do everything. Be the first one to say “I miss you”. And understand that you’re not weakening yourself by doing these things; it takes much more strength to be vulnerable than one might imagine.

Like I said ladies, I know we don’t like to admit that we need to work on ourselves, but it’s time we took our heads out of our asses and got to work. We only get one life to live and there’s no point in half stepping our way through it.

tags: lists rules for the ladies
previous Women can't handle the truth
next 5 secrets about women that men MUST know