In Defense Of Marriage 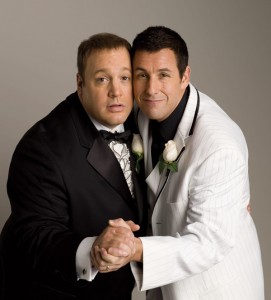 Gay marriage has been an ongoing issue in many states for some time now, and is once again being hotly debated on the Federal level.  Various states have seen legislation in support of gay marriage die on the floor of their chambers or be defeated at the ballot box.  The recent repeal of Don’t Ask Don’t Tell and the challenges to the Defense of Marriage Act has given new life to the issue in our Nation’s Capitol and has led to a very charged public discourse.  Not so much in the barbershops and “Houses of Hair”,  though.

We usually try not to talk about homosexuality in the black community much less gay marriage because of the gravity of the moral issues surrounding the topic, unless it followed up or centered an HIV/AIDS discussion.  Even though the “Church” serves as the true North of the  American people’s moral compass on this issues, the “Church” itself is rife with homosexual men who will forever stay closeted because of attitudes in the church they attend faithfully.  It’s almost kind of sad that the one entity that could and probably should help them will never reach out to them because of the Good Book, especially when the Eddie Long’s and Father Such n’ Such O’Malley’s of the world are getting caught with little boys on a quarterly basis.

The fact that heterosexual people have done a poor job of upholding the sanctity of marriage and the family unit is almost cliche now, and the stats to support that fact are abundant (and is probably best embodied in Bobby, Whitney and Bobby Christina aka Nose Candyland.)  That aside, the fact of the matter is, whether it’s on the State or Federal level, the law is egregiously unconstitutional, and almost kind of surprising it’s still on the books, given the litigious culture we live in.  Civil Unions have been presented as a concession, and that’s pretty much tantamount to “Separate But Equal”, but would accomplish the task of allowing someone to share their benefits with their partners.

This is the part of the where I should attempt to explain or validate my post by claiming to have a gay sibling or having befriended a gay person when no one else would.  But the truth is, where I stand on the issue of homosexuality is not important.  For that matter, it shouldn’t be important to the legislators and voters that have rejected the idea, because it really should not matter.  Judging people based on ancient book whose authors thought it was cool to stone adulterous women and nail people to a cross seems a bit ass backwards and denying them basic rights seems even more ludicrous.

What’s your take on gay marriage?  Should the Clergy, particularly the Black Clergy support gay marriage?  Are Civil Unions an adequate compromise?  For those of you that are totally against the idea, I’m interested in your point of view, and welcome you to express your opinions, but please do so respectfully.

SBM Fam: Check out Slim tonight on I’m Just Saying Radio at 10pm Central. He’ll be going through 20 questions and talking about a recent post. Should be a good time.