Single Black Mail: Inner circle dating and the friends caught in the middle 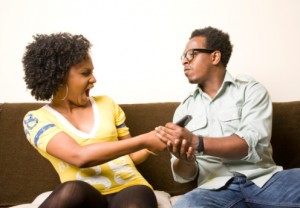 As we get older our networks continue to expand and there’s always a conversation among the fellas about dating inside or outside the circle. Problem is because we are Black people we usually don’t have a choice but to either stay in the circle, or be completely oblivious to any circle. Here’s my situation;

My boy dated this girl for a few years, they were pretty serious about each other, but after some complications that were never remediated they called it quits. Ad then after that there was a back and forth, ending with my boy deciding that there was no real reason for him to keep in contact with her. No hard feelings, wishes her the best, but can’t see the motivation to maintain on the relationship.

Well, the problem is this girl is significantly ingrained in my network. Meaning, that we come into contact with each other on a regular basis. One of my pain points is that they live in separate cities, but I live in the city that she lives in. Hence why they never see each other, but I see her A LOT.

My only question is, since she cares about him a lot and he won’t reply to her attempts at communication. She asks me about him. Nothing serious, but I just feel awkward. It’s one thing for you to bump into the ex of an old mate and she asks, “How’s such and such?” She only asking that because that’s how she know you. But, when the person is genuinely a friend and a member of your circle. It’s awkward, especially because I care about both of them as friends. So I don’t feel close enough to share details, but I feel close enough that I’m not going to blatantly ignore her question. So what would you do? Should I just plead the Fif? Should I keep it high-level and say he’s fine? (Note: Tried that, she asked me a follow up question. Then I had to start speaking Yiddish again.) Is it cool for me to go out of my way never to run into her, and have to deal with this? (You know, run away from my problems.)

See Also:  Blogger Responds to Dr.J: Do You Want to Date Me or Text Me?

Any help would be greatly appreciated.

You’re issue is one that I’ve dealt with from both sides. I’ve been the friend-in-common, and the friend-of-the-inquired. This is one, if not THE biggest pitfall of dating within a circle of friends. All you have to do is watch your favorite sitcom (Friends, Seinfeld, GirlFriends, SATC), and you’ll see that even in the fictional universe of TV Land, there will always be complications with inner circle dating. I absolutely abhor it, and definitely advocate against it if it can be avoided, and if you can overcome issues like this.

To give background, I’ve dated within my circle before, and when you do this, you’re close friends will automatically gain interest in your relationship. People within the relationship will start discussing your issues, and everyone will have an opinion. No matter what, someone will break that golden code, and then it gets messy.

When me and my inner circle GF called it quits, it automatically set up a tumultuous situation for those left in the aftermath of our relationship ground zero. They almost didn’t know how to function if we were both in the same vicinity, and it just made for awkward situations.

I HATED when she would talk to our common friends about our problems. You never want to look like a sucka in front of your friends, and your friends don’t need to know ALL your business!

On the flipside, I’ve been unknowingly placed in the middle of relationship issues between two people I consider great friends. I knew their issues, because they both spoke to me in confidence. it was like I had the entire piece of the puzzle to their issues. Because of my moral compass, I invoke the Prime Directive where I do not interfere. I will offer them real talk advice, but I won’t put down the other, or try to influence either way. I care about them enough to be real and make sure their common best interest is upheld.

I say all of this to say, you shouldn’t plead the fif, because it’s disrespectful to her. You should keep it succinct, and if she asks follow-ups, tell her that you don’t really speak to him like that to know. Otherwise, be real and tell her you feel uncomfortable answering those questions and you don’t want to seem like an informant. She’ll have to respect that, and if not, then cut her off. No need to avoid her either, because if she’s in your circle, you’re DEFINITELY going to see her often.

So be real or be succinct, but don’t be a middleman to a dead relationship.

That’s my answer this week. What would you do? What would you tell our friend above? What did you think of my response? Please evaluate and retaliate #WaltClydefrazierRap.

If you have a question, email me Streetz@singleblackmale.org. SingleBlackMail on-site Form coming soon!

previous Because You Been Drinking...
next Are Modern Men Too Lazy to Court