4 Reasons Not to Cheat on Your Wife 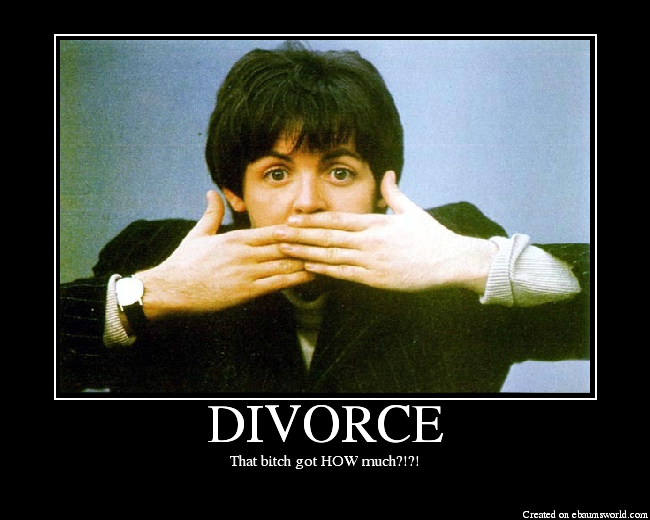 The divorce rate is at an all time high and alimony settlements are even higher. Divorce hearings are starting to look more like NFL contract signings because these heffas are getting broke the f*ck off. The list of celebrities that pay exorbitant amounts of alimony is almost identical to it’s who’s who list. Tiger finalized a divorce that will make him the don dada of this new peer group he’s a part of. He’ll have to pay anywhere from 100 to 500 million dollars on the settlement and I’m pretty sure he’ll end up paying much more than that in the long run. Just ask anyone in that new peer group about being dragged back to court and having the judge decide his ex-wife needs more money, like Nas for example, who is still paying for that overpriced milkshake. At this rate, the solution to the deficit might be to tax any income from alimony and child support payments heavily. In any event, Tiger’s misfortune got me thinking about a few other reasons besides losing most of your money that you shouldn’t cheat on your wife…

Tiger Woods is worth almost a billion dollars, so having to drop 350 million in a divorce won’t leave him homeless. The downgrade to a smaller mansion will be temporary, you’ll be fine sport. For the average Fuquan however, 40-50% of their net income will significantly alter their lifestyle. Even before the judge decides your fate you’ll be paying copious sums of money for your wife’s portion of the legal proceedings, etc., etc., etc. And if you manage to make it out of the proceedings without having to pay any alimony, the cost of being in court alone will be a nice setback. It’s a no vaseline ride all the way around.

Yes, I know that’s pretty much the same as “the money” but I think it’s an important point to hammer home. For the rest of your natural born life, you will be doing 100% of the work and getting 65% of the money and that’s if you’re lucky. That includes paying all the fees for her legal team every time she decides to drag your ass to court. For the rest of your life you will be working harder while she works less. If you don’t believe me, wait until you get that collect call from your ex in the Bahamas 10 years from now in middle of February asking you why your check is late. Won’t that be a bitch?

Also falls under “the money” category, but I’m just itemizing them the way it will appear on your paycheck. It’s only logical that the more kids you have, the more money you will be paying and makes the countdown to 18 that much longer. To add insult to injury, you can’t deduct it on your taxes and possibly won’t even get to see your kids. Well, actually you’ll see them as that line item on your check.

Your boss isn’t going to give you a raise because you’re getting fleeced for money by your soon to be ex-wife , your company won’t match contributions to your alimony/child support fund and money trees don’t exist yet. You can cop that book from the dude in the funny jacket to see if you can get a government grant, but it’s probably not going to happen. This is all coming out of your pocket buddy. Hopefully you got your money’s worth.

Ok, so it was actually all about the money. It may not be tricking if you got it, but half your money is a lot to consistently trick, which leaves less money for actual tricking. Of course there are other more obvious reasons why you shouldn’t break your vows, but if that isn’t enough for you, a hit to the wallet might wake you up. I’m not trying to preach, but there’s just something about losing large sums of money at one time that deeply disturbs me. Don’t let Tiger’s losses be in vain. If you’ve taken vows don’t get caught on Facebook giving strange women lap dances break them. Unless you have a pre-nup…then
I suppose you can do whatever the f*ck you want.

“But I need that half Your Honor”,

P.S. If you have ever read this site and enjoyed a post, make sure you vote for SBM in The Search for the Ultimate Blogger. It literally takes 5 seconds. We need yall to support. Thanks!

tags: Advice cheating divorce Marriage
previous How I Knew She Was the One
next Welcome to Wedding Season