Home About Me Breaking Old Habits
About Me
Featured
Single Black Mail
May 5, 2011 RightCoastLexSteele 61 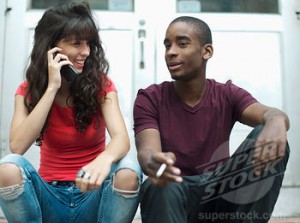 Streetz normally handles the mail, but this letter ended up on my desk for some reason, so let’s see if I can’t shed some light on this situation, given my unique perspective and all:

Hello, I would like your thoughts on this situation. Me and my boyfriend are
in our mid-thirties. Our relationship is fairly new (8 months). In the dating
phase of our relationship, my boyfriend shared the fact that he smokes weed. I
asked “How often” he said, once every now and then. He stated he gave it up
for a year prior when he was in a previous relationship because his
ex-girlfriend despised it. After divulging this new data, he asked how I felt
about it. I’m Jamaican so I’m familiar with ganja smoking. There are a number
of folks in my family that does it on occasion so I was fine with it since it
wasn’t regular use. Since that conversation and after getting comfy a few
months, I’m noticing that my boyfriend smokes every weekend that he is with me.
He states it relaxes him. This is now bothering me. Not only am I thinking he
doesn’t have any control to give it up but the weed smoking is affecting our
sex. He falls asleep easily, he’s just blah, sex drive is low and the Johnson
doesn’t “get up” like it used to which is indirectly affecting me – a woman
at her peak! I recently spoke to him about possibly stopping especially since
its counterproductive to his workout routine/goals. (The munchies doesn’t help
with his diet restrictions) He went 2 weeks without smoking then ran into a
friend that hooked him up with a free bag. Needless to say, he smoked it. I lost
it and went off on him. I told him I didn’t agree to be with a weedhead and
that he’s an addict and don’t have any self-control. He said it was free. I
said Well, you should have gave it back and told dude that you’re good. I
don’t know what to do or how to approach this. Can you assist? I don’t smoke
anything and never dated smokers. I don’t want to be controlled or dependent on
any substance to relax or have fun. What are your thoughts? Outside of this
issue, our relationship is great.

Since you’re asking for advice, you clearly want to make this thing to work, but what’s also very is clear is that he’s probably not going to stop anytime soon. Before I tell you what you can do, I’ll tell you what you can’t do. Nagging him every time he fires one up will get you no where fast, and just stress him out more, which will lead to him firing another one up. It’s a vicious cycle. Going off on him because he lit up that free bag after two weeks of not smoking and throwing out the “weedhead” lingo is a bit harsh. Keep in mind, you made the decision to continue the relationship after he told you he smoked. You could have easily walked once he told you this, so every time you get mad at him, get mad at yourself a little bit as well.

See Also:  The Children of Divorce: How Divorce Influences Our Relationships

How you approach this situation depends on how important this issue is in the overall scheme of your relationship. Do you object to his smoking for health or religious reasons, or is it because the stigma associated with ganja smoking? (Contrary to what your Granny may have told you, all weed smokers aren’t lazy good-for-nothing rastas with locks swinging down their backs). There’s a huge difference between a pet peeve and a deal breaker. If the rest of the relationship is great outside of this issue, this may be something you just have to compromise on, because it doesn’t sound like he’s going to stop on his own anytime soon, especially if he’s bumping into people that give him trees for free (I wish a n*gga would). Sure, he gave it up for a year for an ex-girlfriend, but that’s probably why she’s an ex-girlfriend.

Your approach also depends on how much he actually smokes. From the sounds of it, you guys spend most of your time on the weekends, so you’re only aware of his weekend toking. If he’s smoking during the week as well, then chances are if the relationship progresses and you guys will start spending more time together, which means you’ll just be spending more time annoyed by his smoking. More importantly, can he sustain his habit financially, or is he barely making ends meet just to smoke? If it gets to the point where he’s constantly asking you to borrow money to support his habit, you can certainly do bad all by yourself.

The fact that it is affecting your sex life does raise a red flag for me, because problems in the bedroom will inevitably snowball into issues outside of it. In a situation like this, son needs to be laying pipe so well, you wouldn’t care if he smoked a joint or went out and banged 8 gram rocks with Charlie Sheen.

I’d say give it a few weeks before you say anything, but definitely take the time to talk to him about it. Take that time to decide whether or not you think you can be around someone that smokes for the long haul. Whatever you decide to do, stay away from giving an ultimatum, because you may end up single because of a little lady called Mary Jane. I hope I helped you out a bit, and please tell me where I can find this gentleman who is giving out free bags.

Of course I was smoking when I wrote this,

previous Sentimental Value
next How to Survive Dating a Crazy Woman