Don’t Be Trifling at the BBQ 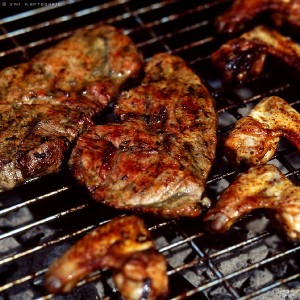 Memorial Day Weekend has come and gone, and the summertime BBQ season is now upon us. No matter how busy you are, you will find some time to check out a few BBQ’s over the summer, and on into the fall depending on the climate where you’re at. If you’re lucky enough to get invited to a BBQ, avoid the following social faux paus when heading out the spot:

Please don’t embarrass yourself by being the greedy friend or the invitee of an invitee that leaves with enough food for lunch everyday next week. Times aren’t that hard my friend. This is the quickest way to get un-invited to future events. There are some gracious hosts that will encourage their guests to take something for the road, but don’t confuse that with license to spread foil over their entire pan of chicken and exit stage left. And don’t think we don’t see you muthaf*ckas that try to sneak sh*t out one by one. We know that ain’t the same plate of food you’ve had the whole time.

Bring Your ‘A’ Game

Don’t even bother looking at the table(s) where dominoes and spades are being played if you know your game isn’t universally respected. Losing to worthy opponents is one thing, but losing a game because your brain dead partner insists on sending passes your way or cutting all your books without making any of their own can cause a healthy person’s blood pressure to rise. I’ve seen several BBQ’s lose their thunder over games of spades and dominoes gone wrong. Tread carefully when talking sh*t, because if you’re game can’t back it up, word will get around on the circuits that you’re a bum. Sad, but true.

See Also:  Is Your Booty Too Big for Corporate America?

Ladies, I don’t give a damn how fine you think you are, there are just certain parts of your body I don’t need to see while I’m eating. This includes your crow’s feet. The same goes for men. If you look like “George the Animal Steele” (no relation) or usually have man boob hanging out the side of your wifebeaters, consider wearing a T-shirt you think makes you look buff or something. No one wants to see that. Your sporadic use of P90X and/or Insanity workouts does not allow you to opt for more revealing clothing.

By no means should you empty your pockets on some booze, but try to do better than bringing the headache hooch. The only thing more annoying than you bringing that cheap sh*t is the fact that you’re making it a point to take home your $6.25 bottle of liquor because nobody ain’t drink it. What’d you expect, there’s enough dust on the bottles to plant something. That’s not a good look. I’m not asking you to shell out Sam Adams money, but don’t bring half a 12 pack to a spot with 40 people. Resist the urge to explain to the host and other that a major brewer or distiller actually owns the p*ss water you brought. Also not a good look.

I know you’ve had your share of experiences with trifling people that have shown up to your BBQ’s or friends you’ve brought along that have embarrassed the hell out of you. Do share.

tags: summertime
previous 3 excuses against working out that women need to overcome
next Should Women Carry Condoms