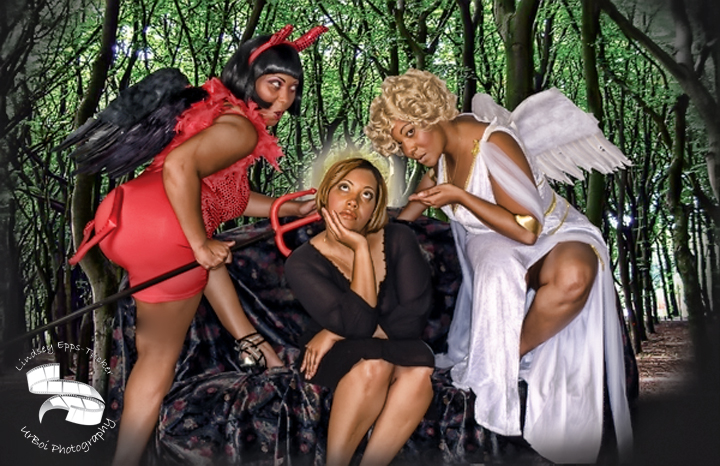 One of the more interesting things I’ve noticed over the past few years has been the particular set of struggles and tribulations experienced by women whose moral code is the most influencing factor in their love life. These are women who desire romantic connections as deeply as anyone else but who also have a strict set of values they are trying desperately not to compromise in fulfilling those desires. It’s what I like to call “The Good Girl Dilemma.”

Good Girls can generally be split into four different categories – each with their own particular set of issues. In today’s post I want to take a look at the four and offer some advice for being or dealing with each.

Typically, the Angel is someone who grew up in a religious household and therefore put their relationship with God before their relationship with anything else. Angels are beautiful. They are attractive for a number of reasons. First, it says something about their character that they are able to remain true to their core beliefs in the face of all the temptation that exists in the world. Also, the fact that Angels have very little relationship experience usually means they’re not completely jaded and disillusioned when it comes to men. They still believe in things like trust, fidelity, love’s ability to overcome and all that other awesomeness women lose sight of after male mistreatment. Angels also have their own issues that can make things difficult. Sometimes Angels can have trouble understanding the shortcomings of those less sanctified. Many people find faith, or a moral code later on in their life. The lives they’ve lived prior to that discovery may be filled with all manner of sin and debauchery. Some Angels just can’t accept this and that lack of acceptance can hinder relationships. Also, Angel’s inexperience in relationships may mean a lack of emotional and sexual maturity when in a relationship. If you’ve been in a few healthy relationships you learn how men and women communicate with each other what works, what doesn’t and how to make a relationship work. Saints can sometimes be clueless on this front. They can also be clueless in the bedroom which can lead to a whole other bag of issues.

See Also:  Ladies, This Can Be Why "Round 2" Doesn't Happen

The Teeterer is the woman who’s spent much of her life as an Angel, but is at a point where the loneliness and perceived hopelessness of her romantic situation are causing her to question the things she’s always known. I have a deep empathy for women reaching this point. You spend your whole life believing that if you do the right things and be the right person, eventually your soulmate will find his way to you. The truth is, in today’s society, that doesn’t always happen. When you see yourself rounding the corner of your late twenties and staring your 30’s in the eyes, but you still have the same amount of relationship experience that you had when you were 17, you might begin to have a bit of a crisis of faith. When every guy you’ve ever had any feelings for tells you “you’re too good for him” or “he doesn’t want to hurt you” or “he’s just not ready for someone like you” it can be a little disheartening. Especially if you’re watching all of your friends who are less morally inclined fall in love, or at the very least, have fun being single. At some point the Teeterer is always tested, maybe it’s a guy at work they like, or maybe it’s a guy from their past who reappears, or maybe it’s just a guy the meet in a club during a moment of weakness, at some point a test will come and how she responds will dictate a big part of the rest of her life.  If you’re a woman at this point remember that you are best at being you. You’re not going to be good at being someone else, so no matter how green the grass looks on the other side of the fence, be yourself. If you’re dealing with a woman at this point – know what you are and aren’t willing to give her from jump. Be man enough to let her know, early on, if you’re not what she’s looking for.

“But once a good girl’s gone bad, she’s gone forever.”  This isn’t entirely true, but there’s some truth to it. Sometimes a Teeterer will fall and find herself in a relationship she knows she shouldn’t be in or doing things she knows she shouldn’t be doing. When this happens, sometimes she’s able to summon her inner strength and fortitude and go back to being the woman she expects herself to be, and other times the rabbit hole is just too deep. Sometimes, she falls all the way in and the person she once knew may never be seen again. There’s no more tumultuous time in a human’s life than when a good girl decides to go bad. When a woman loses sight of or rejects the moral code with which she’s previously lived her life, all hell breaks loose and the outcomes are completely unpredictable and sometimes pretty sad. There’s lots of anger, sadness and guilt and those emotions express themselves in a myriad of ways.  If you’re dealing with a good girl gone bad, you need to understand that who she is now isn’t who she always was nor is it who she always will be. Contrary to popular belief, good girls gone bad often find their way home so it’s important to realize that you may not know or like the person they eventually become. You have to understand that you’re dealing with a woman in transition and relationships built during major life transitions rarely work. If you’re a good girl gone bad my only advice is that you protect yourself in all ways, and be self aware. Don’t just act, take the time to decide what you are willing to do and what you’re not willing to do based on whatever morality you’re currently living your life by. You don’t have to be who you were, but at least maintain a standard.

See Also:  I Date for Convenience

“They say you can’t turn a bad girl good…” This too, is not entirely true. I’ve seen women change. And by change I mean, I’ve seen women go from living lives where what they will and won’t do is situational, to living lives where what they will and won’t do is decided by a value system strengthened way before any particular situation arises. It can happen, but it usually takes an extraordinary set of circumstances so dealing with this type woman means understanding and accepting those circumstances. If you’re dealing with a bad girl gone good, you have to understand that she’s probably seen a lot and experienced a lot as is therefore going to have a very low tolerance for male mischievousness.  You never know how much of herself she had to cauterize to make the changes she wanted to make, so her opening up to you- if she ever does- is a big deal. It’s a responsibility you need to know you’re accepting when you pursue a relationship with her. On the flip side, bad girls gone good make awesome people to be with if they’ve fully made the transition over to the good side. The know all of the bad girl tricks we men come to love but they now reserve them for you and only you.

Good girls, whether they were born good and remained, whether they fell and got back up, or whether they were born bad and became good are an interesting set of women to get to know and explore. Ladies, do you find yourself sitting in one of the categories above? What has your experience been like? Fellas, ever dealt with a good girl – what was that like? What have I missed. Feel free to over share in the comments.

Lastly, it looks like summer is coming early this year. When it gets hot the goons come out so always keep your eyes open, your head on a swivel and if it pops off …

tags: Advice love Relationships Rules of Engagement
previous Your baby's daddy name DOES NOT need to live on
next Good Dads, Bad Dads, Headaches, and Enlightenment