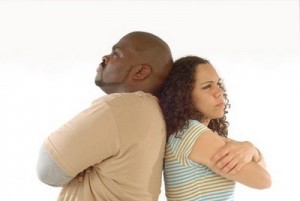 So who’s fault is it when there’s bad sex?

Every woman reading this post just said, “The guy!” And in some cases, that is true. But ladies, it can be your fault too.

It takes two to tango, but when the tango isn’t any good, someone has to take the blame. A lot of what needs to happen for any love making to occur depends on the man’s ability to “perform”, but once he’s literally keeping up his end of the bargain, the woman does have some duties to fulfill to make said tango work. Some guys will tell you all a woman has to do is lay there, but for the most part every guy likes a woman that knows what she’s doing.

I don’t think some women take their role or responsibility in making sex good seriously enough, therefore if the sex is bad, it’s automatically his fault. A man’s ego enables this thought, because when the sex is great, he’s running all over the room beating his chests and C-walking like Tyrese. Using the tango analogy, while it may be a man’s role to lead the dance, not too many guys can dance too well carrying around dead weight, or leading someone that just can’t seem to get the steps down.

If a woman is accused of just laying there, the response usually is “Well, do something to make me not just lay there…”. And in most cases, that’s true, everyone needs a little stimulation. But what about the woman that always just lays there? Just lays down, expecting the man to climb on her and finish his business. She’s not necessarily waiting for it to be over because it’s bad, she’s just always waiting for it to be over so she can roll over and go to sleep. It’s not like you need to do all 86 things on those crappy Cosmo lists (which is usually 12 or 13 things worded different ways), but there’s a few things that you can do to make everything go smoothly. After all, only Jesus can raise the dead.

This goes beyond good head, because usually a dude can overlook “OK” head if the sex is good or great. (And of course, no head at all means sex isn’t happening.) Good sex doesn’t always boil down to pure sexual ability, but the ability to be in tune with your partners needs and use that sexual ability to meet those needs. Just having a vagina doesn’t qualify as being in tune with a guys needs. That little dandy of a trick that used to work in college probably won’t work the people you’re meeting these days. The same way men are expected to know how to use their equipment, women should be held to that same standard, and be ready to take a look in the mirror if the sex isn’t exactly where it needs to be.

See Also:  Fight or Flight: The Break Up Reflex

I’ve clearly glossed over the fact that one contributing factor to a bad sexual experience rests could rest on size, but since women have been known to say size doesn’t matter, I’ll just pretend it doesn’t for the purposes of this post. Besides, if he’s on the smaller side, just laying there isn’t going to make it grow.

So…who’s responsibility is it to make the bed rock? How much of the responsibility falls on the woman’s shoulders? Is the “she just layed there” excuse a cop out?

This is the last day to vote for SBM in the Black Weblog Awards. We made it in 5 categories and need your support! Best Post Series, Best Group, Best Sex & Relationship, Best Design, and Blog of the Year. You can vote here. Please do this today and help us win a few awards!

previous Abortion: Does the Man's Opinion Even Matter
next 3 Increasingly Lame Blog Rebuttals