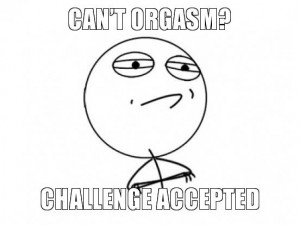 What’s going on everyone!

I had a post all lined up, but this email came across my desk (you’ll see what I did there soon), and I had to respond! SBM reader community, meet Confused:

I have been dating this guy since last November, things are great, the only
thing is when we are having relations, he doesn’t ejaculate, which means we
go alot longer than most, yes relations can last for 30 minutes non stop. or until
he is sure i have had my multiple. He said it is him and is his mental..I assume
him using a condom prevents him from releasing his, and he always wears a
condom, well the last 8yrs, post 1 child and 1 scare.  Is it common for
condom to prevent a man from releasing or is it the fear of another child?  He
has physical custody of his child, so every day is a reminder.  What is a girl
to do, i love giving oral, but that does not solve the problem, and my skills
are pretty good..got pointers from gay men..and they are foolproof.  He says he
has multiple orgasms..and the only way i know is that his head is very sensitive
after the deed.. he just wants to and loves being inside of me. I am at
a crossroads and too embarassed to speak to my guy friends..He says he is happy
and loves our relations..even when i am at that time of the month(TMI)

This seems like the antithesis of a guys problem when he can’t make a woman climax. Usually, I hear women complain that dudes are 60 second assassins, and actually hope for the “problem” you face. I can see that you want to please your man, and that’s super commendable! I salute you my fair lady (SBM WOMEN TAKE NOTES!! *ducks*). I know that you’re looking for answers, so let’s see where I can help:

See Also:  Why We Need to Change the Conversation About Engagement Rings

Is it common for a condom to prevent a man from releasing or is it the fear of another child?

I would say it’s a combination of both. Men react differently to wearing condoms, but for the great majority, condoms can desensitize and lessen the intensity of sex, which allows for a man to last longer. That’s why a lot of dudes will get crazy and prefer to go Kojak in a woman, because they want to get that feeling of warm squishy goodness. Hopefully, they realize the many consequences of slapping skins sans glove, and choose to strap up.

Now, as far as prevent a man from “releasing”? Nah, I don’t think so. The whole point of a condom is to catch the milk before its spilled. If the condoms actually prevented release, there would be a blue ballz epidemic of Bubonic Plague proportions in the world!

Fear of another child might cause a mans soldier to remain at-ease, as opposed to prevent the release of his White Walkers from beyond the wall.  If the fear of children prevented ejaculation, than a lot of people reading this site might not be here today.  I’m not a p-sychologist but I’d be hard pressed to believe that fear of children  could make that happen.

Let’s be real, once the levees break, there’s no stopping the ocean from breaking through and making the city moist. It takes mental toughness and Jedi mind tricks to prevent the Bussa Buss.

See Also:  How Do You Stay True To The Game And Your Friends Of The Opposite Sex?

I’ve also heard of men who ejaculate so much, they literally have “nothing left in the tank” and will orgasm without ejaculation. This is entirely possible, just not the average.

See confused, you share a commonality with a lot of men. You want to please your partner in every way, and want to have that final stamp of approval from your partners body that you did a job well done sexually and they’ve reached the mountaintop. I will echo the same sentiments used by women to men: ” Just because a man doesn’t bust,  doesn’t mean he enjoys sex any less!” We’ve had to accept this from your non orgasiming chicks, so accept that from us, hahaha!

Finally, if this dudes runs red lights, he’s definitely a Savage, but he loves you. Reciprocate that love, and leave out the part where you learned how to pleasure a man orally from ANOTHER MAN!

SBM fam: Any comments on this topic? Is it a problem if a man doesn’t blow up if his fuse is lit?

I got FanMail. TLC!