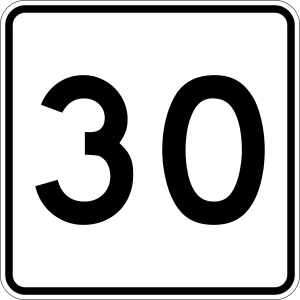 When I was growing up, I always looked forward to that milestone birthday that I thought would make life better. Turning thirteen meant my parents had to respect my gangsta as a teenager, turning 16 meant I could drive legally, turning 21 meant I could drink while driving , and turning 25 meant my car insurance wouldn’t be as expensive. Now that I’ve passed the quarter century mark, I’m trying to slam the brakes harder than Tiger on Thanksgiving. I’ve even resorted to lying to people about my age. I figure if I start now, by the time I’m 47, I’ll have lied about my age for so long, I’ll actually be convinced I’m only 31.

30 is that cliche age that people base their success on while they are young. Just about every smart move made by a person during their 20’s is designed to boost them across that 30 year mark with flying colors, hopefully with some time to spare. One false move can set you off pace. The job, finances, and love life all have to be figured out by 30 or you’ll spontaneously combust when the clock strikes 12 on your 30th birthday. Hence the origin of the pact formed between men and women, usually after drunken yet mind blowing sex:

See Also:  The Type of Men Most Likely to Leave You

Nicodemus: I know. You’re welcome. By the way, where’d you learn to do that thing with…

Nicodemus: Fair enough. Listen, I think we make a good team, but I’m not ready to settle down. If were both single when we turn 30, we should get married. Deal?

Suzy Wong: Keep slinging it like that and you’ve got a deal.

30 is probably the reason for this reported epidemic of black women unable to find a man. I’m sure a woman looking to settle down can find a soul mate eventually, but they probably won’t/haven’t by 30. This is understandable as the proverbial biological clock rolls on and society continues to imply that you are defective if you aren’t married by 30. Men probably have the same concerns about turning 30, until they smooth talk some young dumb girl into sex but it’s clearly not made into as a big a deal as the woman’s plight. **cue James Brown’s It’s A Man’s World**

I could sit here and tell you not to sweat turning 30, age is just a number and all that jazz. But the reality is that everyone is fascinated with the turning 30, so as much as you try you won’t be able to avoid it. You’ll attend a slew of 30th birthday bashes and endure the agony of friends whining to you about turning 30 and still not doing x, y and z. I’m still on the fairer side of 30, but I’m not to worried about it right now because I’m still far away from 30 (look at that…lying right there), and I’m pretty sure my body is not going to combust or age dramatically overnight. (I hope)

See Also:  How Not to Cheat: A 5 Step Tutorial

previous From Elegant to Elephant: When Your Woman Gains Weight
next Happy Independence Day!