Every man wants the prettiest girl in the room, no one wants the “she’s okay” chick and we damn sure don’t want the ugly chick. The thing about the okay chick is that she’s subjective; some guys may think she’s at the higher end of the Smash spectrum, while more picky guys may put her at borderline unattractive. Most woman fall into the “She’s Okay” category because different strokes are for different folks. Then we have the pretty girls. If a girl is bad, there is no debate. Sure you may argue who is badder out of her and another chick, but that doesn’t change the fact that she’s a universal neck turner. The same rule applies for the ugly chicks. You can’t look at Busted Brandi and say, she’s kind of cute with that eyeshadow on, you know and I know, that girl is WOOF. 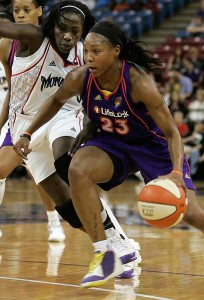 But Busted Brandi has just as much of a shot as Pretty Girl Rock. Why do men cheat on supermodels with mudducks? Ugly Girl Swag. I coined the term Ugly Girl Swag but I didn’t go into depth. In college there were several big girls, and I’m talking J Hudson before the personal trainer big, who were the go to girls after the parties wrapped up and you couldn’t bag the girl you wanted. The good thing big girls have going for them is that most of the time they’re cute in the face. The Ugly girl has no redeeming value. You can’t squint and say she looks a little like Tatiyana Ali, no fam, she looks like Muhammed Ali after the Frasier fight. But the prettiest dudes will get caught up with them. You see some Chris Brown looking cat, ladies love him, he could probably bag shorty and her friend at the same time. Then you look behind him, there’s a chick who should trade her Forever 21 for a WNBA jersey because she’s rough! Pretty boy is walking in front of her while she yells at him, and the other girls are like “I hope that’s his sister”. Because in their mind, ugly dude with pretty girl means ugly dude has money. Ugly girl with pretty guy means—what was he thinking.

The truth of the matter is fellas get caught up. Sex is always on a man’s mind, and when you can’t bang an Ashanti you have to dig for that Lil’ Moe. A girl who’s less attractive than the average female, knows it. This thing about “I don’t know why ugly girls think they’re cute” isn’t physical, it’s mental. An ugly chick has been ugly her entire life, it’s not an acne breakout—SHE WAS BORN UGLY. So she trains like a Ninja, preparing herself in the art of suck-jit-su, hand-job-fu, and Ride-it-shido. An Ugly girl is a sexual dynamo, but how will she practice those bedroom skills if a guy can’t get around her misshapen nose? The Art Of Conversation. I’ve been at clubs and had excellent conversations with girls who I would never go for. Sometimes it’s aggression. Pretty girls sit on the wall and are shy, ugly girls are in the middle of the floor busting it open for a goon. I was at a club and this one girl was so slick, she pulled my hand like a guy would a girl, lead me to the dance floor, worked me for a song, pushed up beside me, so her face wasn’t directly in front of mine, and started to whisper loudly in my ear all kinds of things. She was funny and witty. She did what guys do to girls, and it might have worked if I was on the hunt. This ugly chick, banging body, pretty voice, and knew how to grind on the dance floor, would be the toast of the town if she was a little prettier. But here she was in the club having to work for penis.

I guarantee that girl found her a boo that night. And once she got him, she either got her rocks off and moved on to the next dude in the next club the next week, or handcuffed him. This brings me to the final point. Ugly Girls know how to keep a man. I know dudes who are married to ugly chicks, they know she’s not pretty, but she helps out on the bills, listens to him instead of complains, and puts him in his place when he needs it. I love ugly chicks because they had it harder in life and are willing to work harder at things like relationships and applying makeup. I’m not saying seek out the 3’s and 4’s of the world, but don’t be afraid to give them a shot, in the words of Wanda she may just “Rock Your World”.