Stay In Your Lane Please 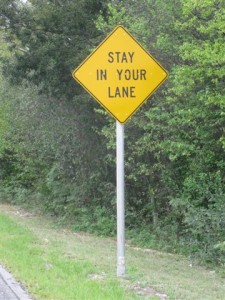 We all have flaws and it can be easy to find faults in someone if you analyzed them closely enough. Even models look a hot mess in the morning. However, there seem to be a lot of people that have a very high opinion of themselves that is sometime unwarranted. You got a lot of people walking around as 6’s expecting 9 results. No matter how much you delude yourself, it’s going to be really hard to pass that 6 off for a 9 in the real world. There’s an annoying population of the world that have an inflated estimate of their self worth that doesn’t quite add up. By self worth, I’m taking into account not only the way people think they look, but all the things they place value on that they may think they are just as good as or better at than other people.

There is a huge difference between have high self esteem and overestimating one’s self worth. A lot of time it seems that people refuse to be honest with themselves and come to terms with the fact that they may not live up to a certain standard. If you want to play a game with people based on looks and possessions, you’re playing with a short deck and you’re gonna come up short every time. Tire gloss is not going to turn your Toyota into the Beamer that’s going to turn the heads of the bobble heads you’re trying to impress as they stumble out the club, and wearing leggings isn’t going to turn your long back into a donk. Not gonna happen.

Quick tidbit about “lane jumpers”. The jumpers don’t just exist in social circles. There is usually huge infestations of lane jumpers lurking at the workplace, diminishing the ability for everything to run smoothly in their efforts to attempt doing another person’s job and failing miserably. What could have taken one person 20 minutes to do is now going to take 3 people 2 hours to do, all because someone wanted to do much, or sometimes not enough. Their focus on stealing the shine from someone else stopping them from actually shining. Nobody likes a shiner anyway. If you’re really as good as you say you are, the proof will be in the pudding. Just make sure you got good pudding.

This is all not to say that even if you may not be that attractive that you should expect to live your life in solitude forever. Your life isn’t over if you aren’t drop dead gorgeous. It just means you should stop trying to be something you’re not, and just be comfortable with who you are. The more time you spend wondering why someone else garners so much attention is less time you have to worry about yourself. Overestimating your self worth to compensate for shortcomings instead of actually addressing them head on will lead to no where. So if you know you got a funny shaped head, don’t get a mohawk because it’s what’s poppin’ in the streets. If you had a normal haircut, she’d take you seriously.

See Also:  The One That Got Away

I’m far from perfect, so don’t think I’m attempting to look down on the “less fortunate” and lecture them. I know what my strong points are and work everyday to improve upon my weakness. What I won’t do is pretend that I’m something that I’m not that. The things I can change I will change, and the things I can’t will just have to stay the way they are. If that’s not good enough for someone, they can kick rocks. After all, inflating values is what got us stuck in this recession. That probably had nothing to do with what I’m saying but I felt like saying it…so there.

Questions? Comments? Concerns? There’s an app for that.

previous When is it OK to Deny Him S*x?
next Things You Should Know and People You Should Meet