The Hyphen Issue – Should She Change Her Last Name? 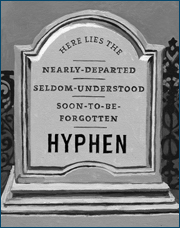 Recently, I was perusing Twitter, and the usual antics were on display. My timeline is pretty diverse, so different conversations will occur and I will be entertained and intellectually stimulated. One conversation that I saw was posted by the homie @itsMarisaRoss. She posed the following question:

Fellas, if you get married, and your wife doesn’t want to take your last name (or hyphens it), would you be mad?

I saw a lot of commentary from men and women on the issue, and I chimed in quickly, but figured I’d speak on the issue with the SBMassive! Here is my stance on the issue.

I never really felt the hyphenated names. I understand the concept of women carrying their father’s last name with them. I understand that women mostly just took a man’s last name just because and never really had a choice, and now they want to exercise their right. I feel that with marriage, there are certain aspects that should be kept “old school” and taking a mans last name as your own is only right.

I remember asking my mother why she kept my father’s last name even after they divorced. She would tell me “Its MY name, I earned it!” I thought that was SO real! It was interesting that she equated possession of his last name to a sense of entitlement and accomplishment. It is in a sense though. Let’s be real, the pursuit of marriage has long been more desired on women’s side than men. Men usually see it as “the final frontier’ and a loss of self. Like they are dying to be reborn and leaving their old selves. No more reindeer games, because now you have to be serious and start this family. Women are the ones who dream of this day, plan this day from a young age, and look towards M-Day as the culmination of a loving relationship. So acquiring that last name, like the ring, is the women’s equivalent of an XBox “Call me MRS Wifey” achievement being unlocked. So why would you want to bastardized your married name with that hyphen of your old name? My mom is also Caribbean, so you know we have 50-11 names. Mail comes to the house and we can literally have 4 different letters with 4 different names for her, smh. You would think the fed’s listening…n*gga what last name?

See Also:  Your Name Is What? That's a Fail.

When I get married, I want to proudly present my wife and say “This is my wife, Mrs Metta World Streetz”. I don’t want to drop a hyphen on that sh*t! Maybe that’s me being a traditionalist, but that’s how I feel. Being part of the working world, I understand the need to keep maiden names. It can be a pain to legally change your name on all of your documents, and change your Outlook and all pertinent information. I also agree that a woman’s identity and name are her own. So if she hyphenated her own name, I wouldn’t be too upset. I don’t think I’d be upset at all really.

My one area for concern is children. I do NOT want my children with hyphenated names. It causes crazy confusion for all parties involved. I remember a dude in my dorm who had a hyphenated last name. I would ask him his name, and he’d skip the hyphen sometimes, and add it with others. I asked him why, and he just *insert shrug text art* and said it depends on how he feels. I’m big on names, especially my own, and respect for names. That couldn’t be me, and I don’t want that for my kids.

Women get the joy/blessing of carrying a child 9 months, and some feel it’s their right to be able to name the child with no input also. I can agree to an extent ( a small extent), but damn can a dude get his FULL last name in there at least? How many of these illegitimate kids running around with their dads last name and no hyphens, yet in a married relationship you want them to hyphen? Chill. I think that’s too much. Let them have their dad’s last name. They still carry the lineage on, and hell if I have daughters I would have to cope with that reality too. Your name still lives on with your progeny, regardless.

See Also:  Do Men Think About Their Wedding Day?

Also, don’t be completely adverse to taking your husbands last name. I saw some woman on Twitter say she would NEVER take her husbands last name, and if he didn’t like that too bad. I can already tell she will be forever single with a sign over her coochie that reads “Winter Is Coming”. Don’t be her. Have an open mind, and at least hyphenate.

Women, rock out with the hyphen. If that’s the biggest issue you have with your relationship, you are lucky. Just let the kids rock with the full name.I think that’s a happy medium.

P.S. If you follow us on Twitter, you may already know. But if not, Single Black Male won the Best Blog Design and Best Blog Post Series categories at the 2011 Black Weblog Awards. Thanks to everybody for their support in helping us bring home a couple trophies. Special thanks to Lianne Farbes for the site redesign. We sure as hell couldn’t have done that ish ourselves.

tags: names
previous Things You Should Know and People You Should Meet
next The Break Up: How Projecting Ruined a Relationship