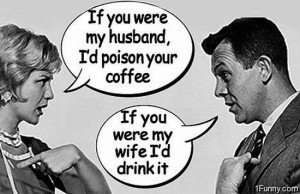 Elliot: Honey, can you pass me a beer?

Mercedes: Why don’t you get one of them b*tches to get you a beer…

Elliot: Wha…what are you talkin’ about?

Mercedes: Them b*tches that you had all up on you @ Joe’s BBQ gettin’ you beers…I saw all that…

Elliot: They were sitting right next to the cooler…and that was a whole month ago!

Mercedes: Well we need to talk about your little flirting habit anyway…

Daisuke: Baby, is something wrong?

Daisuke: ::thinking:: Got the day off…perfect time to catch up on True Blood.

Shaniqua: Umm…why did Julie say she was gonna “See you later” the other day?  Y’all still f*ckin?

Daisuke: You can’t possibly be serious.  That was 3 weeks ago.  Are you on your period?

Man…if I head a dollar for everytime a man has had that conversation with a woman, I’d kill myself if I woke up one day with Bill Gates’ money.  True story.

I’m not pickin’ on the ladies today, I know these conversations can happen both ways, but it’s just easier to frame it from a male point of view because y’all are all f*ckin nuts anyway I’m a guy. (Isn’t that the point of the blog, Capt. Obvious?) Far too often in relationships, sh*t happens during the course of said relationship that aren’t addressed in a timely fashion and by the time they are addressed, it seems to be a moot point.  Whether it be your SO’s tendency to be a bit friendly when you guys are out or the fact they hurt your feelings when they {insert insensitive thing SO’s do to one another}, you can’t let too much time pass before addressing it.   I understand that sometimes you may not feel like addressing a situation right away, or the right time does not immediately present itself, but there needs to be a universal statute of limitations on grievances.

See Also:  How Do You Love?

Even if you were right, you may just have to let it go after sitting on it for 10 months.  Besides the fact that it’s unfair to blindside someone months later,  if it takes you several months or possibly years to get comfortable enough to talk to your SO about a perceived slight, you shouldn’t be in that relationship or you’re just f*ckin’ crazy.  More often than not, when you wait around to express yourself, emotions begin to snowball and what could have been a 10 minute discussion turns into an hour long argument or possibly worse.

Similarly, if there is a single incident occurs and is already dealt with, there is no need to bring it up in future conversations and/or arguments for whatever reason.   You can’t use something you claimed to have gotten over as leverage in future conversations, because that’s a sure sign that you aren’t over it.  Moving on means just that: move on.    Come to think about it, if you guys are arguing that much, you probably shouldn’t be together in the first place.

In summation: take a sh*t, or get off the pot. Even the government forgets about certain crimes after a while.  Let.it.go.

Has this ever happened to anyone?  Did you smack the person into the wall for bringing up some old sh*t?  Any theories as to why people do this?

previous Do cheaters have the right to remain silent?
next The Not So Tall Man’s Guide to Gaining Friends, Influencing People and … Winning