5 words or phrases that if women say, #reallymeans you’re in trouble 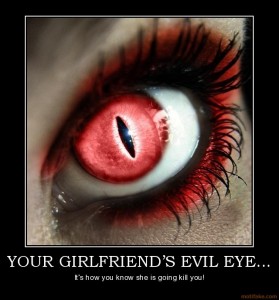 Fellas, today I come bearing gifts of knowledge and advice. My favorite motto remains “The one thing I truly understand about women is that I will NEVER understand women 100%”. I don’t think the good Lord meant for us to be able to decipher women so easily. Male-Female interaction is a challenge and one of the greatest pursuits in life. I forget who said it, but @DrJayJack continuously brings up the point that you master a craft after putting in 10,000 hours. In other words, the more you do something, the better you get. The more you interact with women, the more you come to understand. In my dealings with the fairer sex, I noticed that their verbal communication can be subtle, yet powerful. If you listen carefully, there are a few buzz words women used that when invoked, mean that you got some ‘splainin to do!

I’ll do it myself

Let’s say she asked you for a favor and you either a) didn’t come through or b) slacked. She will be pissed. Pissed to the point that she will do it herself, and announce it CLEARLY for you to hear. Truth is, she could’ve done it by herself all along, but women like to use the simplest things as bonding exercises. Whether it’s fixing something around the house, helping her research something online, or even accompanying her to the grocery store, she will look for ways for y to bond with one another and do something constructive. When you don’t comply she will shrug it off, but know she is BOILING on the inside and the storm clouds are slowly forming.

See Also:  Good or Bad Questions: Where You At and Who You With?

It’s not that serious

Lies. It’s ALWAYS that serious. This does hold a caveat that you can best gauge this phrase if you have been arguing. Also, if you two are discussing an issue you know she’s passionate about, and she ends the conversation with that and refuses to speak on her feelings further. Women want to be heard and want you to know their point of view so you never get it twisted. So when she says it isn’t serious, I would take that with a grain of salt. It would be good to tactfully revisit the situation later and concede. Pride can be the Stone Cold Stunner of relationship finishers.

Fine is the ultimate conversation finisher. To hear her say fine, means she’s done talking and is plotting her next move. Now, this next move could be that she will sleep it off and come back the next day refreshed, or it could mean she’s gathering a list of your errors, so that she can sound off on you properly when she explains the reasons why she’s angry. When an argument is ended men will rejoice because they no longer have to endure a drawn out conversation about petty bullshit, but when she ends that conversation, with that word, that’s like her walking away from the table in a negotiation and gearing up for a lockout. Stay low and keep firing, word to @MrSpradley!!

See Also:  Does Submission Give Women Power or Make Them Slaves To Their Husbands?

When she is quiet, this does NOT bode well for you fam. You need to Spider-Man swing out the paint immediately. When a woman is left speechless, and it’s not because you dropped your pants and showed her your Sword of Omens, it’s nothing but bad news. You have as much chance of not getting verbally filet’d as Rick Ross has as a cover model for Men’s Health Magazine. When a woman is silent and angry, she is charging up like Goku ready to make her hair glow Gold and unleash a Spirit Bomb of ether in your direction. Only the densest dudes fail to recognize this, and end up on the cutting room floor. Even if you act like a thug, when push comes to shove and she hits you with the silent maneuver, you’re finished yo!

I’ll leave the last one for you to add. What’s some words/phrases that women use when men are about to get torched? Let’s open the lines of communication. Ladies: drop knowledge. Fellas if you know any buzzwords drop them here too. Remember, these words are guidelines and may not be 100% applicable in every situation, but it’s pretty close.

Stick and Stones may break my bones, but duck if she stays silent!

See Also:  Who Built It? Rice and Ryan Deliver Blows at the GOP Convention