Home Featured What’s a King to a Non-Believer? The Argument Against the MLK Monument
Featured
Hot Topics
August 31, 2011 Jeff J. 68

What’s a King to a Non-Believer? The Argument Against the MLK Monument 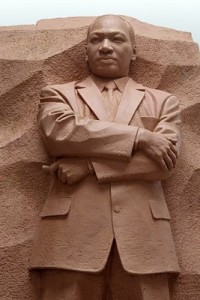 This week has been crazy. We had an earthquake in the Northeast, followed by a Hurricane and the worst of it all, pictures of Kreyshawns stick figure titties corrupting my network connection! Throughout these trials and tribulations, we were treated to a special event: the dedication ceremony for the Martin Luther King Jr. monument in Washington D.C. This man countenance shines bright amongst the forefathers of this nation, yet it was met with controversy. Now the obvious one was the complaint that he’s not a President, so why should he have a monument (translation: hatehatehate),but I was shocked at other claims. I was also shocked that some blacks were leading the criticism.

Some people feel that having a National holiday is enough. That he isn’t a president, so why give him that much shine. I say he has every right to be on the National Mall with other edifices dedicated to Past Presidents. I wouldn’t say that those monuments are reserved for Presidents, but for Americans whose actions changed the course of the country. George Washington, the leader of the revolution, and our First President. Abraham Lincoln, the President who helped unify a divided nation after civil war, and signed the Emancipation Proclamation ending slavery. Now you have MLK, the most prominent member and catalyst of the civil rights movement.

The man who practiced non violence in his protests, endured ridicule from his own and others, died fighting a war not with another nation, but against an ideal of Racism and inequality. The man who sat in a Birmingham Alabama jail, and wrote his passion and hopes down in his now famous letter. He marched on Selma, and Washington, and demanded that we finally live up to the preamble of the Constitution both in fact and appearance! His bravery and galvanizing spirit created one of the most significant paradigm shifts in American History. He had a dream, and while we never want to make dreams our master, he instead chose to make dreams a tangible reality. There would be no Barack Obama, or the idea that we could have a Non white male as president if it wasn’t for MLK! I think that makes him more than worthy of the honor of a monument in his place.

See Also:  How Do Men Avoid The "What Are We?" Question?

Some people say that Martin wouldn’t have wanted a monument if he were alive today. Well first off you’d have to be pretty narcissistic if you demanded a monument or statue to yourself while you lived (no shots at Kareem Abdul-Jabbar). I don’t think he would want a monument either. When your nation or any organization chooses to honor you, they usually just do it, and they don’t consult you. Think about how many soldiers get purple hearts, or medals of honor. They probably don’t want all the press either, but they will get the accolade nonetheless, because someone felt that you should be saluted for your efforts, and wants to bring light to your accomplishments. So Dr King, who didn’t seem like the type of brother hell bent on receiving personal shine, wouldn’t have wanted a monument most likely. That is a testament to his character. Similar to Washington, and Lincoln, and countless others, we give him one because those accomplishments and his sacrifice should forever be enshrined for all to see and never forget.

Some say that these efforts to build the monument were politically driven. Do you know that this movement was actually started by the brothers of Alpha Phi Alpha Fraternity Incorporated:the first intercollegiate fraternity established for Black men? My fraternity saw the opportunity to make this happen, got the grassroots movement to congress, the order signed by Pres. Reagan, and 15+ years later we are here. So the movement was far from “political” or politically driven. You can check the BET special on MLK and his connection to Alpha Phi Alpha by watching the documentary HERE!

See Also:  Why Do Women Get Angry At Men For No Reason?

Others say that we shouldn’t be building a monument to Dr King, when blacks still haven’t overcome all these years later. “Oh blacks are still impoverished and oppressed, but we have a monument for MLK though!!” This is bullshit. Plain and simple. First of all, why isn’t there, or why hasn’t there been, the same kind of uproar whenever a MLK school, highway, or street has been dedicated in his honor? Secondly, to say that we shouldn’t have a monument to him, when blacks are in bad shape in this country, diminishes everything that he and other civil rights movement leaders did accomplish!

We were segregated once upon a time. We were openly looked at as subhuman, second class citizens. Any black person in a position of power or wealth was the exceptions, not the norm. Many people gave their lives so we could be in a better position.  Look at America now, with all our economic and political issues. You think Washington and Lincoln should still have monuments too? We can make the case for demolishing all types of honor based edifices because we haven’t done as well as the ideals say we should. This is where people miss the point. Monuments like the ones in DC stand to give hope.

They stand to remember a tumultuous time in our existence. They were erected to honor those individuals who rose above the challenges of their era, and created a chance in this country. See history at times, is like an infinite loop. We suffer tragedies, strife, poverty, injustice, and all other issues that our predecessors faced. Some people can learn from history, and some will be the doomed to repeat it.

See Also:  Angry Birds: An analysis of the term, “Bird”

We may give up hope, or think that we can never overcome. Then, we gaze upon these monuments, like the one made for Dr King, and reflect on more difficult times. We see the look on a young child’s face, as they read the words etched in stone with Martins words of hope. We see them ask questions and show pride in what they see, and then it hits you. Years ago, people would’ve laughed in your face, people of all races, if you told them that a black man would be honored with a monument in DC alongside Presidents.

The same way we laughed at an idea of integrated schools, blacks voting, and a black president. Life isn’t perfect and we still struggle with a LOT in the black community. We still have a ways to go, but there’s nothing like a symbol of hope to motivate you to be better. Symbols like our parents, teachers, and those who we see from afar, striving for excellence. Martin Luther King Jr. will forever be that symbol for us, and this monument is just another reminder that dreams can become reality.

Today is the day! If you’re in NYC, come join us at the SBM Happy Hour at the Empire Room in the Empire State Building from 6-10pm. In addition to the SBM staff, some of your favorite commenters and bloggers will be there kicking it with us for the night. Should be a good time and look forward to seeing you there!

previous Five Biggest Misconceptions about Black Greek Life
next Commit or Die: Even Good Relationships Should Have An Expiration Date