A few weeks ago I was at this Together Apart event called S*x Ed for Adults. It wasn’t one of those things where I sat there learning how to put on a condom or that babies don’t come from storks. It was real talk amongst experts, panelists, and the audience about sex, the female body, and bedroom communication. Imagine me, a perverse bastard, sitting in the back of a room that was about 75% women listening to them talk about how they like it and what makes for sheets magic. Imagine me listening to people explain why all coochies aren’t created equal and why some women are continuously on a pilgrimage to the land of O, yet never locate the Oasis because they don’t know their own bodies. Imagine me cracking up as some guy described good poon as soft poon even though I’ve never heard someone say they experienced hard poon. What exactly is hard poon? Titanium walls? You know what? Don’t answer that.

Majority of jokes aside, there were a few quotes, thoughts, and ideas that surfaced as I listened and tweeted from the event. Take a ride with me today in the sex mobile. Fellas, I’ve rented a few Chrysler 300’s for y’all to stunt in. Sorry, I’m selfish yet benevolent. I also respect man law and the pausability quotient. Anyways…

This is a paraphrase of something said during the discussion. It resonated so strongly with me that I considered doing a post on this concept in itself. Let me tell you an abbreviated story. A few years ago I was dating this chick. After 6 weeks of trying to get to the loinal union and learning a good amount (more than I asked) about her past, she decided it was time to experience General Gutsticker. She’d made references to rough play and how she had certain “hood” tendencies, but I rocked with them because she was hot and more mature than any other chick I’d dated. Fast forward past the excess information and there we were in the dark engagin’ in our first wrestling match. I was doing just fine until she yelled out “Who’s your bitch?!” After these words, a pin wasn’t the only thing you could hear drop. Put more simply, a soft rocket doesn’t touch the stars.

Good s*x is good s*x, but what was good *ex with your last partner doesn’t mean good s*x with your current. I’m all about expressing the joys and pleasantries associated with coitus, but I’m not one for repeating old habits just because. If I tell you this, then respect it. Same way I wouldn’t expect a new chick to enjoy me slapping my jawn against her love hood, she shouldn’t expect me to do what the last man did from jump. There are multiple ways to get to an orgasm. And if there aren’t, you need to sort that out with a licensed professional.

There’s really no way to tell a man he isn’t cutting it in the sheets without bruising his ego.

Sooo, all you can do is be positive and tell him what you like and when he’s winning. If you sense he’s about to leave you unsatisfied, get that thing outta there but keep making smiley faces. Anything less would be uncivilized. Then just don’t call him after that. We do it to y’all, so it’s only fair.

@shanelcooper: Know your body before you start running around looking for a mandingo d*ck. (paraphrase)

It’s funny how often I hear lady friends talk about needing a cucumber, then they get 1 and can’t breathe or walk right. I’ll leave it at that.

From audience: “Sometimes you’re gonna want him to put you on the washing machine and treat you like a dirty hoe.”

Jade Egg will strengthen that warm and moist muscle. 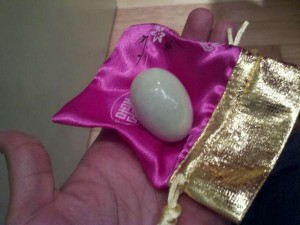 Real talk. I never saw or heard of this “device” until the event. Apparently, using this egg-looking thing can take the walls to magically magnificent levels. If you got that loose goose, holler at the jade egg and get your squeeze on. Would you use a “weight implement” like this?

@Umystic Sex is a conversation that’s happening throughout your bodies.

Stop f**king and start talking. The more you talk, the more you’ll…well, you know. America ain’t the only place you’ll come.

@Tmizy People go to the same things that caused trauma to try to heal from the trauma. People need to talk about this.

I thought this was a dope point. I think we all know someone that this applies to. It may even be you personally. If not, it’s still worth noting. Recognize and get the help you need to stop repeating the cycle.

Women need to be mind-f*cked to help them reach orgasm.

Is this true? The women in the audience said yes. I’ve always been a fan of jigsaw puzzles and trick questions before the draws come off.

@drcastellanos: There are a lot of things that affect a woman’s lubrication. It doesn’t always mean she isn’t into it.

Negro or relevant ethnic term, turn that damn fan off if it’s blowing on her coot. If that don’t work, holler at that astroglide. It must go in at all costs.

@drcastellanos Most times when a woman is having an orgasm, her abs contract. That’s one of best signs. #WatchTheGut

A man asked about this. I supported the question. Some dudes know when the magic happens. Others have no clue. If you just got that lady nut, say you got that nut. It’ll make us feel better. If you didn’t, tell us to keep going or to stop because it’s too sensitive. Worst case scenario, just say “phuck yeah!” It works in the movies with the bunnies.

I get it, but I can’t do it. If there’s no kissing, I can’t go in there. I’ll be Noodles McNulty. Maybe it’s a Pisces thing. I don’t know. Just thought this was interesting and worth mentioning. What about you? Can you s*x it up without smooches?

That’s all I got for today. What are your reactions to the snippets and my thoughts? Agree or disagree? Is good s*x a nice have or must have for you in a relationship? Any other thoughts on bedroom communication? The answers may seem obvious, but I’m pretty sure they vary.

P.S. I’ll be on the Battle of the Sexes panel hosted by Menage A Talks at Nightingale Lounge in NYC on September 29th. Click here to get the details and get your ticket!

previous The Dark Side of Fairy Tales: Influence on Men’s Perception of Women and Themselves
next The G-Code: Unwritten Rules That Separate Men From Boys