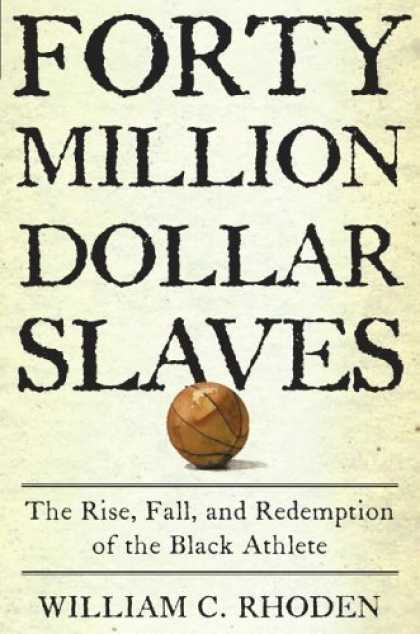 Google it. Read it.

I was chatting it up with Sprads the other day about how I thought Mayweather was an absolute joke.  I didn’t disagree with him when he said, he’s an excellent business mind, but I thought the way he did it was just through a series of gimmicks.  I look at Mayweather and I compare him to the boxers that I respect and I just came to the conclusion, Mayweather is a different breed of a Black athlete.  There’s nothing about Mayweather that resembles the persona of Ali, Joe Louis, or Sugar Ray Leonard, nothing.  Mayweather is absorbed in himself and his pockets, he’s not concerned with the progression of Black people in America or is he trying to be a model citizen.  The fact of the matter is, he is not alone.  This holds true for many of our Black athletes today.

In the past, athletes used to stand for something, they used to use their fans for good.  You don’t have Black athletes like that anymore.  I was reading Bill Rhoden’s book, 40 Million Dollar Slaves, and I thought to myself, you know what’s funny is, we can’t really fault these athletes.  There used to be a time when athletes stood up for themselves and they got free agency and more money, but now they’re right back in the same situation as before … slaves to a contract.  Well when you look at Black people in America you’ll notice the same thing, we’re all just modern day share croppers.  We fought for the abolishment of slavery, but now I bet you that 90% of us are working for some white guy again, who is only telling us everyday, “Not enough, keep working.”  However, when I really think about it, I expect more out of Black male athletes than I expect out of the blue collar working professional.  First off, they make WAY more money, and second, they have a bigger reach, their voices are louder.

It goes back to Uncle Ben’s conversation with Pete, “with great power comes great responsibility.”

I would like to say that on the other side of this argument that’s missing is that many of these athletes have been enabled since Junior High School.  If you’ve ever watched the AAU circuit, when it’s discovered that a boy has any type of basketball skills and is 6’4” at age 12, he’s almost immediately snatched up and out of reality.  From the 8th grade until he hits the professional league, no one will ever tell him no, they are simply trying to facilitate their investment into a money making machine for their personal gain.  Do I think that somewhere along the way someone should have told Michael Vick and Allen Iverson, no?  Yes.  There’s no reason that there’s been countless incidents that occurred throughout their lives that no one raised a flag on.  Allen Iverson’s high school coach said that Iverson refused to practice and only wanted to play in the games.  He was a two sport Varsity athlete.  Explain that logically to me.  Don’t worry I’ll wait.  You can’t later on complain that kid won’t practice.  Vick’s own family members bought the dogs for him, but when he went to jail the only thing they could do was reach out to news channels and collect money for giving a personal account of Michael Vick’s story.  So perhaps, the public and the community is partial to blame for the malfeasance from overpaid miscreants.

Despite all that, it has to stop.  The run-ins with the law have to stop.  The idiotic press conferences have to stop.  The lack of real involvement in your community has to stop.  Do not do the service because it makes you appear to be a model citizen and increases your superstar status.  The NBA Cares commercials are a complete joke.  Take it from me, I’m a member of an organization that has done service for years, we never talked about it, we just did it because it needed to get done.  We are in an era where the media is way more interested in the private lives of public figures and tries to tear everyone down.  Let me explain that to you, that’s because deep down, as Americans we need to feel that someone is worse off than us to make us feel good about ourselves.  It’s the media’s attempt at giving you self-esteem.

However, athletes need to stay out of the news for DUIs, marijuana possession, weapons possession, domestic disputes, fighting, public intoxication, reckless driving, infidelity, sex tapes and pictures, and everything else that keeps coming across our news feeds.  If you want to be in the news for something, be in the news for doing something positive and uplifting.  And you shouldn’t have your jersey on for the special, you should be there because it’s furthering the cause, not your career.  While I’m sure that per-1000 Black males the athletes are not the ones being locked up the most or commiting the harshest crimes, their offenses are the ones that get digested by the public.  In 2012 it would be a tragedy for any Black male athlete to be operating under the assumption that sports and entertainment are not the most frequented source of knowledge for understanding Black males in America.  We simply have to do better.

See Also:  Why Don't You Care About the Baseball Playoffs?

tags: money team sports
previous Why Men Don't & Won't Support Other Men
next Five Women I Adore But Could Never Be With