The Friend Zone: Where Good Men Are Punished for Being Good Men 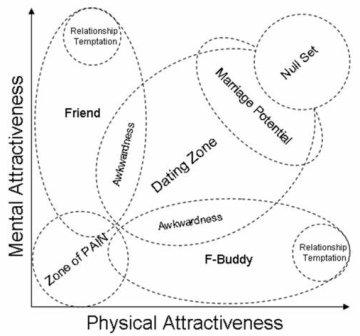 Let me open by stating that men and women can be friends. That issue, as far as I am concerned, is dead. However, you will find that women typically dictate the course of these “friendships.” Telling a man who likes you as more than a friend that you see him as “just a friend” or he is “friend zone” is the most offensive thing you can say to him next to “I’ve had better” or asking “Is it in, yet?”

The “I only see you as a friend” statement is to men what “I’m not looking for a serious relationship” is to women. What both statements are really saying is, “I’m sorry, you are not qualified to fill this open position. Thank you for interviewing. Would you like to work in this unpaid, non-benefit internship instead?”

What is a Friend Zone?

For context, let’s define it: Urban Dictionary – The Friend Zone: A state of being where a male inadvertently becomes a ‘platonic friend’ of an attractive female who he was trying to initiate a romantic relationship. Females have been rumored to arrive in the Friend Zone, but reports are unsubstantiated.

Lastly, to add insult to injury, rather than giving you what you want she assures you that if you try out the Payless flats for a while you’ll come to appreciate them as much as the red bottoms. You’ll forget you even wanted red bottoms. The Payless flats are just as good! She then turns around and gives away the red bottoms to some random chick and expects you to be ok with it.

This scenario is ridiculous – and this is how it feels for men when we want to be your boyfriend and you tell us you just want to be our friend. It makes no sense for you to get offended when you are trying to give us something we didn’t even ask for in the first place. You’re upset that we don’t just want to be your friend when we clearly stated that we see you as more than a friend upfront.

While I said in the beginning that men and women can be friends, I must clarify that Friends With Benefits (FWB) does not count. In this unique circumstance, you have to ask yourself would you two be friends without the benefits? If the answer is no, and it likely is, then you two aren’t really friends. Calling yourself FWB’s eases the realization that you and this man have nothing in common, share no similar interest and likely wouldn’t even acknowledge each other’s presence if it wasn’t for one of the key benefits – the exchange of great sex.

See Also:  Please Stop Having Children By My Future Husband

I’m not going to say women have a bad taste in men, , but for a period of time in their lives, women have a bad taste in choosing the men they need versus the men they want. Often, there is nothing wrong with the men trapped in the friend zone. Let’s face it, the main reason you put men in the friend zone is that despite all the winning qualities that make him a great friend, you aren’t attracted to him “like that”. Men are the same way when it comes to pretty women.

A point often overlooked during these discussions is the fact that The Friend Zone is essentially a detainment camp where good men who weren’t good enough to be your boyfriend are banished. Why would we want to be there? It is not a reward. It is a punishment.

I know you’re saying “I have 10 or 20+ male platonic friends.” But, do you really? Does he call you only to talk (about conversations that have nothing to do with sex)? Does he even know/remember your birthday? Do you talk just as consistently even when you are both in committed relationships? If you answered “no” to any of these questions, then are you two really that good of friends or is he biding his time until there’s a prison break and/or are you simply using your BFF until the next BF comes along? Be honest, is your “platonic friend” imprisoned in The Friend Zone by choice or mandate?

Did you enjoy the perspective offered in this article? Check out our homepage for more candid content from the SBM team or contact us for advertising.

See Also:  Sleeping In My Bed - Three Reasons to Stay Away From Taken Women