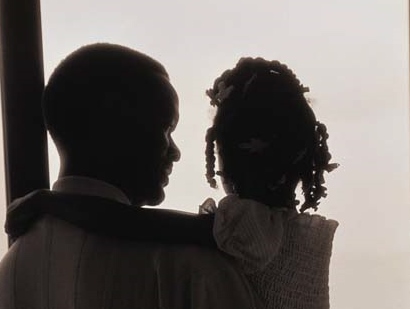 You guys wanna know a secret? More than anything, I’ve always wanted a daughter. When the prospect of having children was nothing more than a distant dream, the child I dreamt of the most was my future little girl. As I’ve gotten older and the idea of having children has progressed from dream to long term goal, to short term goal, to plan, the need to build a legacy that lasts generations has increased my desire for male offspring. I need sons to carry forward my name and advance whatever greatness I achieve in my lifetime. Still, when I think about being a father, when I think about my relationship with my children, the relationship I look forward to the most is the relationship I’ll have with daddy’s little girl.

I imagine we’ll be close, close enough for her to feel comfortable sharing with me her romantic hopes, dreams, trepidations, and loves. At being a man, I’m pretty well practiced. Not only that, but I’m also the kind of man that spends hours upon hours thinking about decisions I’ve made, analyzing why I think the things I think, and constantly working toward achieving that next level of manliness. I say that to say, I think I know men well. I hope I am a good enough father and a man enough man to be stern, when necessary, gentle when necessary and when necessary, comfortable enough to share with my daughter all of the secrets she’ll need know to be successful in life and love.  Most of all, I hope that through my actions she’s able to learn everything she needs to learn about what a man should be.

Two Monday’s ago I started the Future Father Series with “Five Things About Women I’ll Teach My Son,” today’s post picks up where that one left off. Today I want to share with you all five things about men I’ll teach my daughter. Let’s jump right in.

Many Men, By Nature, Are Secretive

Men abide in secrets. All of the best and worst parts of a man, the things that make him who he is, are found in places he keeps obscured from public view, only sharing with those who’ve earned his trust. This is not a bad thing. I’m actually distrustful of men who portend to bare their souls to every person they happen to come across. Maybe it’s because we’re not asked about our feelings enough as children or maybe it’s born out of some antiquated ideology around masculinity. Whatever the cause, the fact remains, most men you encounter will have secrets, and before you give yourself to a man, make sure you’ve seen those places no one else sees.

How might you do this? Well, the first step is to listen. Listen not just to what a man says, but also to what he is saying. Bits and pieces of the truth of who a man is and who he is not can come out at any moment. Secrets are not always shared in deep, expansive conversations, sometimes they’re bared in those unexpectedly intimate moments when you’re sitting around doing nothing. Next, learn to challenge without judging. Most of the secrets a worthwhile man will share will be things he’s already spent hours obsessing over. If you can ask a perfectly timed question that doesn’t pass judgment but forces him to re-think whatever conclusion he’s already come to, you’ll get the rare opportunity to see that man sans the wall, moat, shield and suit of armor he’s built to protect himself. And once you’ve seen us that vulnerable, we have but two choices, kill you or love you. Most times we’ll choose the latter.

Ladies: Ever met a man who kept the best parts of himself to himself until he developed a certain measure of trust in you?

Fellas: How secretive are you? How much of yourself do you hold back in the early stages of a relationship.

This is not to say that men are perfect, we are not. It is to say that the vast majority of a man’s actions, both heroic, and villainous, will be the product of premeditation. In hindsight they are mistakes, but in the moment, we know exactly what we’re doing and we are weighing the consequences with each forward step we take. Trust not and forgive not a man who tells you he made a mistake because if he views it as a mistake, he’s likely to make it again. Understand, there’s a difference between a man telling you he made a mistake, and a man telling you he made a decision that was wrong. One abdicates responsibility and the other accepts responsibility. The fact that a man takes responsibility for his decisions doesn’t necessarily mean he’s a man worthy of you, but it does mean he has a good grasp of who he is and what he’s capable of; and that makes him more trustworthy than the man who makes mistakes. How you choose to proceed is up to you, but understanding the difference before making your decision is important. If a man shows you who he is, believe him… the first time.

Ever been in a relationship and either made or been the victim of a major error in judgement or poor decision? How did you handle it? When looking back, was it really a mistake?

A Man’s Love Is Not Confusing

See Also:  AskMen: 6 Ways to Determine How Much Your Relationship is Worth

Some things about us are complicated. Our ability to compartmentalize our lives, our affinity for secrets – these are all things that can at times, be difficult to comprehend. But when we love, it’s not complex at all – it’s obvious. The only thing we put before our own happiness, our own goals, and our own desires is a woman we love. Love inspires selflessness so if we’re not putting you first, it’s probably because we don’t love you. If you’re confused about whether or not we love you, we probably are too. If you have to sit around plucking pedals off a dandelion saying “he loves me, he loves me not” you’ve already got your answer. Has there ever been a moment in your life where you doubted my love for you? From when you were just a little girl all the way up till now, whether I was angry at you or whether you were angry at me, you’ve always known I loved you right? My love for your mother is the same and so too will be the love of the man who falls for you. You’ll just know.

This seems a lot more obvious than it really is; if you respect yourself, men will respect you. Simple enough right? The thing you need to understand is, men won’t always use the same yard stick as you when it comes to measuring how much we think you respect yourself. We often make our own judgments based on our own arbitrary formulas that take into unquantifiable account what you say, what you do, what people say you said, what people say you do, and a whole host of other things that may or may not be in your control. We treat you how we think you deserve to be treated, not how you think you deserve to be treated. You might see yourself as a Queen and the man you’re getting to know, through his words, his actions, his general attitude toward you might be showing you that he disagrees. What are you to do then? I’ll never tell you to change who you are or what you do because of how a man sees you, but you do need to understand that sometimes, a man’s opinion about you – however inaccurate – cannot be changed. In those situations you need to have the discipline, character, and self-esteem to be willing to just move on. He’s not for you.

Fellas, keep it real, ever disrespected a woman you were dealing with because you thought she didn’t respect herself? Ladies, ever felt like a man treated you less than you deserved because of a lack of respect?

Not All Men Are Created Equal

Contrary to Jefferson’s words in the Declaration of Independence, all men are not created equal. Sure, in God’s eyes we’re all the same, but as it relates to you and your happiness, you’ll find some of us are better than others. How to figure out the man’s man from the rest will, at some point,  be of great importance to you. There are many scales by which history has advised we judge men. Hov would tell you to judge a man by his achievement, but then Martin told us the ultimate measure of a man is not where he stands in moments of comfort and convenience, but where he stands at times of challenge and controversy. Voltaire said judge a man by his questions, not his answers. Still, Longfellow would say that we judge ourselves by what we feel capable of doing, while others judge us by what we have already done. My advice: judge the men you come to know by the consistency with which they do the things they say they are going to do. A man’s word is his bond and a man who consistently breaks that bond is a lesser man than the man you deserve.

The prospect of having children, a daughter no less, is daunting, and scary, and exciting at the same time. I hope and pray I’m blessed enough to be allowed initiation into the fraternity of fathers. And when I am, I hope for sons, and look forward to daughters. Till then, all I can do is sit around and think about the things I’ll pass on. What do you all think, is this good information to pass my daughter about men, am I missing some major points? How about you? What secrets about men would you all will pass along to your daughters. Moms and future moms, what have you learned from your experiences? Dads and future dads what nuggets of man-logic are you planning to pass along to your little girls.

***If you enjoyed this post, be sure to check back on Thursday as WisdomIsMisery flips the script and shares with us why he doesn’t want to have a daughter. I’ll be back next Monday getting all personal, answering the famed Pivot Questionnaire. Till then… stay low and keep firing.***