Has Technology Made Us Lazy? 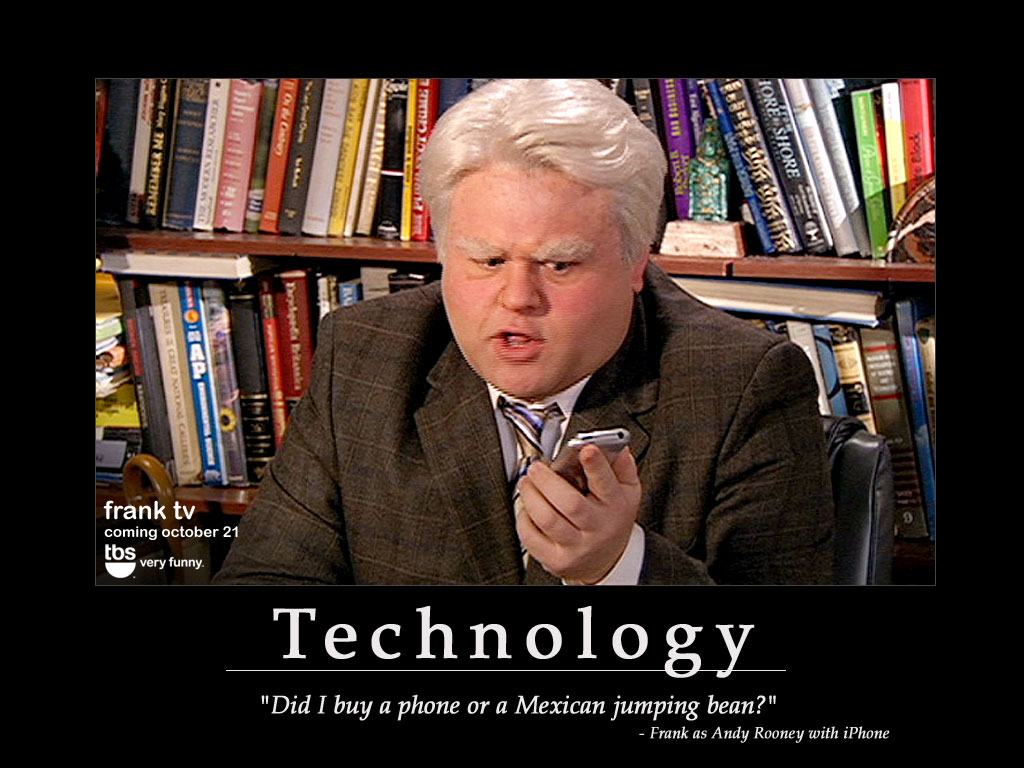 Have you ever seen those commercials where it’s like a teenager dies in a car accident and at the end there’s a statement like, “Don’t be afraid to speak up.”  As if the kid knew that they were in danger and didn’t speak up because of peer pressure.  Have you ever felt that way driving in the car with your friends?  Today, I’m not talking about drunk driving (albeit a very serious conversation). I’m talking about distractions.  I have this theory about technology in the car. It’s just gotten completely out of control.  There’s more stuff to look at inside the car than there is outside the car.

I was riding in the car with my mother one time and she spent the better part of a quarter of a mile trying to setup her Bluetooth, but she couldn’t find it, so she’s digging in her purse and everywhere else in the car to find it. Finally, I asked her, “Don’t you have something you should be doing right now?  Like… driving.”  Of course she stared at me like I had lost my mind, but I was serious. Is it all that serious?

Check out today’s mix from @CarverTheGreat, it’s called Phone Etiquette, and it’s inspired by what we’re talking about today.  A tracklist can be found below, but download it here, or stream below:

People these days are so reliant on technology it’s ridiculous.  I can prove it to you too.  Let me tell you a few things that would probably surprise you but are reason for concern.

1) Quick, the last person you were seriously talking to romantically, what’s their phone number? – It’s a number you’ve probably dialed a thousand times, but you don’t remember it.  Sure if you see it, you’ll probably be able to pick it out of a lineup, but truth be told you don’t know it.  A couple decades ago speed dialing was created and today we have cell phones with contact lists in them.  We don’t have to remember a single number, just their name.

See Also:  Nobody Cares: Men Get Rejected All The Time

2) How many times have you had to tell a friend your address? – This is a pet peeve of mine.  If I tell you how to get to my place once, I shouldn’t have to give you my address each time you’re heading my way.  If you would pay attention to where you’re going, you would remember how to get there or my address.  The current state of GPS systems in cars has gotten so out of control.  I’ve seen people who refuse to listen to you tell them the shorter or more efficient route.  Out of frustration they bark, “Can you just give me your address and I’ll plug that in?!”

3) Which would you rather have happen to you?  You realize you’re at work and it’s raining and you don’t have an umbrella, or you realize you’re at work and you left your cell phone at home? – I’ve been almost all the way to work when I realized I didn’t have my phone.  I immediately stopped what I was doing and went back to get it.  If LL Cool J couldn’t live without his radio, we definitely can’t live without our phones.  Our entire life is in our phone.  A little rain has never stopped a soul, we can buy new clothes, but we can’t replace that phone.  In fact, we’d rather it stop raining so we can use our phones, because a wet phone can be the collapse of a man.

4) Is there anything too big for Apps? – I don’t normally make comparisons to the Good Lord and his greatness, but “For Jobs so loved the world, that he gave his only begotten Apps, that whoever uses them shall not perish, but have stress free life.”  There is very little need to pick up the phone and call the weather anymore.  In fact, they’ve discontinued the weather on the phone.  There’s no need to pick up a newspaper to check the headlines around the world, there’s an App for BBC and CNN.  There’s not even a need to sit down and play a board game with friends, you can play Words with Friends without ever meeting face to face.

5) Can you hop on gchat? – I’ve been guilty of this myself; I’m on the phone with a friend and I notice that my gchats are blinking something crazy.  I’m in the middle of a conversation when I abruptly interject, “Hey can you hop on gchat real quick?”  With the blessing of gchat, you no longer have to have a conversation with just one person.  You can hold 5-6 conversations at the same time on gchat, while the phone only limits you to one-on-one interactions.

6) Why do we need to meet in person? – I don’t judge women who give it up on the first night, I judge women who have never had a real conversation with a person before sleeping with them.   There’s no need to talk on the phone anymore.  You can text and chat your way into sex.  Although, I think sexting and skype’ing are the safest forms of sex in these our last days, but still… if we’ve never had a conversation where I’ve heard your voice or seen your face and I’m able to take you down, I’m judging.

I was riding the train one day and I saw a group of kids who were deaf.  They were all sitting in the same area and they were texting on their phones to each other.  I had this epiphany at that moment.  In a few years, it really won’t be a big hindrance to communication if you are deaf or hard of hearing.  You can just whip out your phone and have a full conversation.  Technology is a double edged sword.  It’s almost made the need to interact with humans obsolete. So for those living with disabilities it’s great, but for those of us who have the ability to talk, we just don’t do it.  You’ll never have to stop and ask for directions again, you can just use your phone.  And quiet as it’s kept, schools across America are not even teaching kids how to write in cursive anymore. What’s the need?  They’re just going to use computers and cell phones to communicate in the written form anyway.

How about you, do you think technology has made us complacent or superior?  Is there any reason to worry about where technology is headed and if it’s in the best interest of humanity?  Has technology frustrated you in the past?  How heavily do you rely on technology to handle your day-to-day business?

tags: has technology made us lazy straight off the iphone technology
previous Is This The End: Six Subtle Signs You're On The Verge Of Breaking Up
next Black Girl Lost: The Fallacy That Unmarried Women Over 30 Are Losing