Home Featured How Many is Too Many: What’s Your Number?
Featured
Sex
December 22, 2011 WisdomIsMisery 232

How Many is Too Many: What’s Your Number? 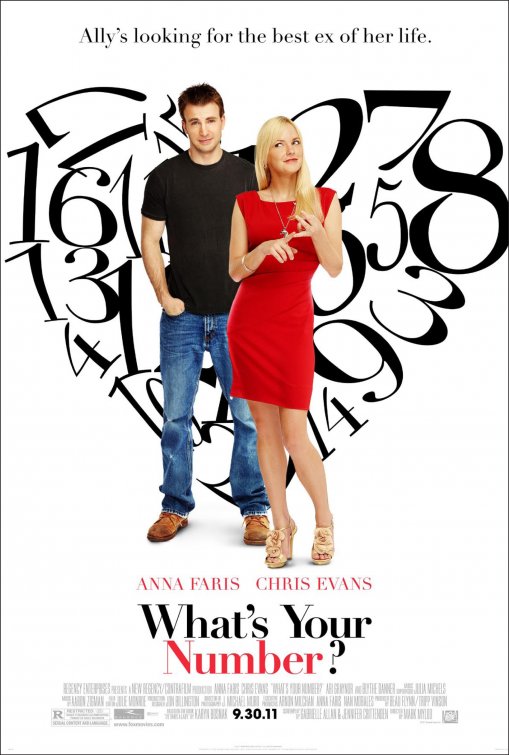 I meant to write about this movie when I first saw it but life happens. In order to keep my G-status intact I will provide a brief explanation on how I came to see this movie in the first place: I set out on my date to watch Killer Elite with Jason Statham, Clive Owens, and Robert Deniro – I have yet to see this movie.

At some point during dinner my date realized the movie she wanted to see, What’s Your Number, started 15 minutes after my movie. While I can’t prove this beyond a reasonable doubt in a court of law, in my mind she suddenly began to eat her Buffalo Wild Wings a lot slower after realizing her movie was playing later than mine. Yadda yadda yadda coincidentally missing the start time of my movie, I was forced to see What’s Your Number. If you are unfamiliar with the movie, you can watch the trailer here.

Now that we’ve gotten that disclaimer out of the way…

I’ll admit the movie wasn’t half-bad and as an added bonus Anna Faris has a surprisingly nice body. She manages to show it off a few different times but without full frontal, sorry fellas. Anyway, in typical romantic comedy fashion: girl meets boy, they pretend to only be friends for half the movie, have a stupid fight, realize they actually love each other and then live happily ever after. Predictable.

However, the main focus of the movie revolves around Anna’s character (Alley) and her friends reading a study in a women’s magazine that reports, “In America 96% of women who have been with 20 or more lovers can’t find a husband.” Naturally, out of all her friends Alley has the highest number (19) and is perpetually single. She then promptly gets drunk and has a one-night stand. This brings her total sexual conquests to the dreaded number 20.

Editor’s Note: In the movie, the above statistic is reportedly based on a Harvard study. I could find no such study on-line. I did find two studies that agree the lifetime median number of sex partners for men is seven and four for women. Keep in mind that median means half the population falls on either side. It is not the average. Further, TheDailyBeast.com notes that men and women count sexual partners differently. Not surprisingly, men try to exaggerate their numbers and women try to minimize theirs.  A government study from 2007 found 29 percent of American men had 15 or more partners while only 9 percent of women said the same. Lastly, “Black men and women were more likely to report having 15 or more partners in a lifetime (46 percent and 13 percent, respectively).” Make of these statistics what you will.

After this revelation, Alley becomes abstinent and vows to track down all of her last 19 sexual partners to see if any of them is her one true love. In theory, if she has sex with another man during the course of the movie it will put her over 20 and she will be #ForeverAlone. I know, right? This plot had me on the edge of my seat too.

See Also:  From His Mother to You: How Men Learn to Treat Women

What’s interesting about the movie is the fact that it only focuses on the woman’s number of sexual partners. The men in the movie are never put under the same microscope. For example, her neighbor has a series of one-night stands right in front of Alley. Yet, he is never taken out of the running for consideration as a potential partner. In fact, there is one point in the movie where he guestimates he has had over 300+ partners – and they both laugh about it. It’s good to be a man.

While I didn’t expect a romantic comedy to provide resolution to the question of how many partners is too many, I was surprised it didn’t even broach the subject in regards to men. I left the movie asking the same questions I went in with: Fellas, do you want to know the number of men (or women) your woman has been with? Ladies, do you want to know how many women (or men) your man has been with? Why or why not?

Is there a magical number of sexual partners that is “too many” for a woman/man to have? If yes, what number is too many in your opinion and what formula did you use to come up with said number? Is it the same for both yourself and your partner? In other words, are men and women equal or equal but separate? Have you ever stopped dating someone because of their number?

I personally don’t care how many men (or women) my woman has been with and even if she tells me, I will assume she’s lying. Women have a very unique way of counting sexual partners that doesn’t align with any standardized method of math that I am familiar with. Besides, assuming you’re clean, it doesn’t really matter. In my opinion, ignorance is bliss. Keep in mind, I don’t want to know but if I find out – and it’s a high number – I may feel some type of way about it because I’m human.

Lastly, I can’t judge a man/woman for wanting to know their significant other’s number of sexual partners. I also cannot fault them for leaving if they deem it too high for their comfort level. Essentially they are saying you have been too sexual in your past and unless you’re a virgin, in the technical sense, they are not wrong. Still, should the standard be equal? I’m not sure. If men are the more promiscuous of the two, should they be the standard bearer that women want to emulate? In theory, it should be the other way around, unless women simply want the right to be as promiscuous as their male counterparts without the burden of judgement. The final question then becomes: Why do we focus on both having the right to sleep with more instead of striving for both to sleep with less?

We are now taking RSVPs for this Friday’s NYC Holiday Happy Hour at The Empire Room in the Empire State Building. It’ll be from 6pm til 10pm! RSVP and stay up to date on future SBM events via the link here: http://eepurl.com/hUUcU

tags: Dating sex partners Women
previous Friends vs. Associates: How Do You Know Who's Who?
next Engaged Black Male: 5 Signs Your Marriage Will Fail