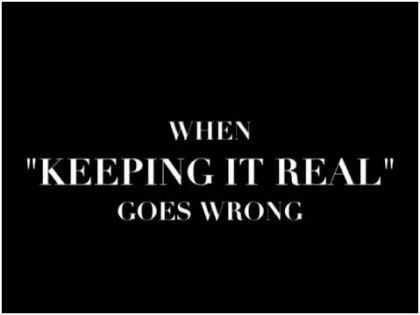 While last time I talked about the importance of being able to lie as necessary for a happy relationship, the truth is I love telling the truth, and it should be done as much as possible.  I’m more than happy to drop my 2 cents when needed (probably explains why I started this blog).

But sometimes … honesty just doesn’t work. There are some things that people don’t every want to or need to hear. There are sometimes when, especially in a relationship: “Keeping it real” goes wrong

***disclaimer***    This applies to people in a real relationship (Girl/Boyfriend, Fiancee, Husband/Wife). You can tell your Jumpoff and FwB whatever the f* is on your mind.

I’ve been on this earth almost 30 years and no matter what woman in my life I’m talking to, I haven’t found a single successful way to let any of them know they are gaining weight. The few times I was stupid enough to even try it resulted in crying or me being cursed the f* out.  Usually this comment comes out of a real belief that your health may be at risk. Alas … if you ever feel the need to tell this to a female (and most forms of b**** n****s and sensitive guys for the ladies) … just stop.

Your friend is a little [sexier, smarter, cuter, a better head giver] than you

Nobody wants to be told by the love of their life that one of their friends would make a better mate. I don’t care if you are talking about Lex Steele, please sell me on the dream that I can do anything and everything he can do, or you just don’t care about whatever he is better at. Now, when we are all in the same room, someone is getting hot every time said friend and the significant other talk for more than 5 minutes.  People have died over this … don’t do it.

If you have been with me through the years, you know my musical tastes (F* R&B and give me Chopped & Screwed all day).  Once, this chic sitting in my car had the audacity to utter out of her mouth “I think Chopped & Screwed is stupid”. I gave her a side eye so mean that besides instantly causing her head to swell … I damn near hit the car in front of me. Basically, if you don’t like something that your significant other does, don’t call it stupid, don’t insult it (some playful jokes are OK), and don’t make them feel bad about it. People have gotten choked out for less.

See Also:  How Singles Cope Without Cupid on Valentine's Day

Yes I know that s/he likes me, but I don’t like them back

I don’t give a f*. If you know one of your friends wants to steal you away from me, and you have the situation under control, don’t confess to me about that. I will be looking at this person with the fiercest mean mug everytime he enters my presence. And if you ever make the mistake of telling a female that … go ahead and delete the phone number now because she will have a restraining order on her within 24 hours.

Need I say more? Lie, lie, lie until you think that God is personally about to come down and slap the voice out of your mouth.  As far as she needs to know, it’s the tightest, wettest, warmest, and best stuff you have ever gotten into. She is your girl now … not a jumpoff.  Think strategically.

Shhhhheeeeeeeettttttttt! I wish a motherf***er would. I just can’t see how any guy is going to take this well .

Honesty is a beautiful thing. When people say what is on their mind, it can give a relationship the staying power it needs. But with great power comes great repsonsibility. Don’t get yourself cut?

What are your “When Keeping It Real in A Relationship Goes Wrong” moments?

– SBM aka EBM aka I know I really am the biggest

previous Still Single? Maybe You Should Settle
next Jay-Z, Beyonce, Blue Ivy and the Importance of Timing in Love