#Kobesystem: Why We Shouldn’t Feel Sorry for Kobe’s Divorce Case 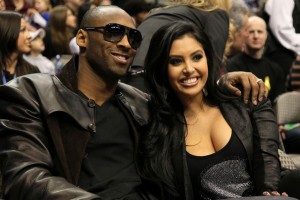 If you’ve been under a rock, or don’t care about celebrity drama, then you wouldn’t know about the ongoing Kobe Bryant divorce case. Citing “irreconcilable differences” (#REALLYMEANS someone was cheating), Vanessa Bryant filed for divorce from Kobe.

Kobe Bryant’s wife got $75 million of the couple’s assets, which are estimated at $150 million, in their divorce settlement. Vanessa Bryant also walked away with all three of the couple’s mansions in the Newport Beach, Calif., area, TMZ reported—the home they lived in, one her mother lived in and another that has been under construction for two years.

Vanessa’s mother told The Los Angeles Times several years ago that the couple does not have a prenuptial agreement, and that was clearly true.The fact that the marriage lasted 10 years also was a factor in the divorce settlement.

Under California law, a marriage of at least 10 years means a spouse is allowed to “maintain her standard of living” after the divorce, attorney Dmitry Gorin told The Times last month.

Now every man wants to throw a fit of rage every time a dude gets taken to the cleaners by his ex-wife. We saw what happened to Tiger Woods. This even prompted Drake to spit the now famous Internet meme:

See Also:  The State of Black Marriage: Whose fault is it? 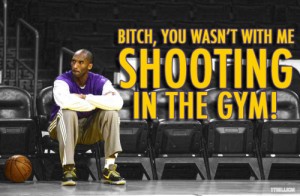 Although the idea of half is crazy to most people, I say that Kobe has no one to blame for himself. This situation could’ve been easily avoided but his missteps proved to make him lose 75 M’s. I can’t cry for you Argentina when you Plaxico yourself.  Here’s why:

He did not sign a prenup. You married a woman at 18 when it was evident that you would be rich and famous and did nothing to protect your wealth. I know women everywhere have an opinion on prenuptial agreements, but the fact remains that if you don’t want be a victim of “giving up half” then you better have it in writing! The biggest “I told you so’s” are coming from Kobe’s family who strongly urged him to get a prenup because of situations like what we have now.

I’m pretty sure that Kobe isn’t the first professional athlete to cheat on his wife and I know he won’t be the last. However, the blatant and reckless nature of his infidelity would make any woman want to take him to the cleaners! Think about the Colorado incident. You cheat, use no rubber, and get implicated in a rape charge? As many women will point out, Kobe wouldn’t be giving up all that cash and assets if he wasn’t doing dirt. Plus, Vanessa Bryant alleges he cheated with 100+ women over the 10 years they were married. Either he was extremely sloppy or Vanessa has Malik Yoba investigating Kobe’s infidelity. I swear athletes think they’re invincible until reality brings them down to earth.

Kobe should’ve spoke to Pappy before Vanessa found out tho!

Karma is a female dog. Some believe in it, and some don’t. I for one believe in garbage in, garbage out. Don’t put negative vibes into the universe or it can come back to pop you right in your grill. Kobe is a snitch point blank. He blew up Shaq’s cheating ways (which led to his divorce and ironically, the birth of Basketball Wives). From all accounts he can be a douche, but I think that comes with the celebrity. He was even alleged to have snitched on Pau Gasol which led to issues with his woman and him playing ga soft in the series vs the mavericks. This looks like karma is collecting on a heavy and outstanding debt on Kobe. There’s only so much malfeasance that can occur before it happens to you.

This won’t really hurt Kobe in the end. Through endorsements, NBA contracts, and the like, he’ll be #RichForever. As men, we can’t constantly throw our capes on for our fellow brethren when they are the causes for their own downfall. I was right there barking at first about the demands for his money and assets, but I can’t front on the facts…

If you ant no punk holla we want prenup
WE WANT PRENUP! Yeah
It’s something that you need to have
‘Cause when she leave yo ass she gone leave with half

previous We Made Love at Midnight: My 10 Favorite Artists from BET's Midnight Love
next 5 Things That Make Sexy Moments Unsexy