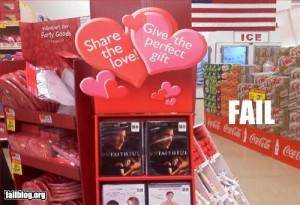 Another year, another celebration of St. Valentine’s Day. This day is filled with love, lust, and commercials to make us spend $$$, and the hopes and dreams of single and taken women of a romantic night with their HIM. Now there are dudes who know how to execute this day flawlessly, and other dudes who fail miserably. Fellas, you do not want to be the failure on this day. Here are some common pitfalls to avoid as you try to win on Valentine’s Day:

Not making plans ahead of time

Fellas this has happened to me before. There’s no worse feeling than walking up to a restaurant trying to get last minute reservations, only to hear that they are either a) sold out or b) have a 2-3 hour wait. You won’t even look into your ladies grill in fear of the “you ain’t shit” stare. Most people make plans 1-2 weeks in advance; so I would suggest that you do the same. Figure out the exact itinerary, main time and alternative times to go, and where you want to celebrate. It saves you a world of hurt and judgmental looks from more prepared individuals.

For single men: trying to setup a movement last minute.

As many jokes as I see from peoples about side chicks and lonely women on this day, you would think that men would get on their job and set up the perfect storm. You will have single women who don’t want to seem thirsty and who want to hang out with a dude, but won’t go out her way to ask. You have yourself, a man who’s been scouting the scene for eligible women. Two plus two equals four to me! Making the day of “hey I’m not doing anything and neither are you so let’s do it together” call is a 50/50 chance. To increase those odds I would put out feelers of interest with your targeted women and see what they are doing. That way you will be ahead of the game. Worst case scenario? There has to be some kind of V-day singles party going down in your city. Go out and make the dream work!

For those in relationships, you should know your lady well enough that you know her likes and dislikes. If you have a high maintenance chick, then you know you’ll have to make it rain. If your woman is the subtle type, then play to her personality. Either way it should be something cool and from the heart. I wouldn’t hold my breath on receiving a gift either. This holiday isn’t for you fellas!

Breaking up before the 14th

Does this still go down? Have women not figured out this swindle yet? Did I just make it hot for some dudes? Oops. Well if you aren’t in high school and you are reading this, your statute of limitation for this cost saving maneuver is over. If you have issues with your lady, don’t be convenient and split before a major holiday only to reconcile after. It’s in bad taste. Hilarious…but in bad taste.

Finding out how important Valentine’s Day is to women.

Last year I took my stance on this “holiday”. So women I date know where I stand. That doesn’t mean I won’t still go out or buy nice things for her. I understand the concept but won’t be controlled by the concept. If she is into it I can recognize that and participate in festivities. If she tells you she doesn’t really care about Valentine’s Day and it’s whatever, she is LYING!! You better have something thoughtful at least planned, or you will be the guest DJ in the doghouse! It’s cool to show love on that day and do something nice. That mantra of “you should love someone and express it everyday not just the 14th” is great, but when that 14th hits don’t be the Dahlia Llama, be LL or Drake. It will work way better.

See Also:  5 PDA Moments You Should've Had with Your Valentine This Past VDay

Any other Valentine’s Day struggles to avoid? Any funny stories about V-day struggles? Sharing is caring, after all!

tags: valentine's day
previous A Man and His Many Vices: How Men Cope with Stress and Unwanted Pressure
next In NYC on Valentine's Day? Come Mix and Mingle with NYC's Finest