Today’s Post is a part of the Engaged Black Male Series. Now that I’m engaged (yeah … no more Single in the name) life is different.  This series takes you into the mind of a Black Man preparing for Marriage and all that it entails. 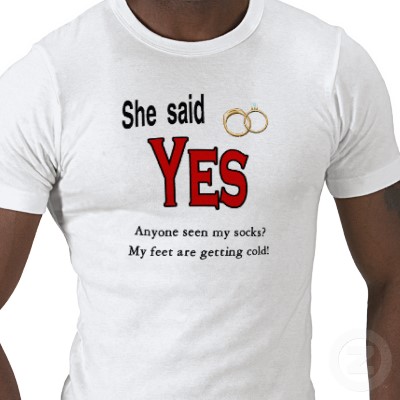 First and foremost, please recognize that SBM (the entity & writer, not the site) does not do trendy or “what’s hot”.  I don’t watch the news (it’s depressing) and since my time on Twitter has been drastically cut, I couldn’t tell you who cheated on what or where.

With all that being said, I had to take this opportunity to get my piece of the  “Sh*t XXXX Say” action. Just worked out too well.

In addition to being engaged, I find myself around a lot of other engaged men. I don’t know if they are trying to be like me, or if there is some mystical force that pulls us together. Regardless, we say some “interesting” sh*

I wanted to elope

I swear the wedding industry would die if men had their way. Every guy seems to have tried and failed at getting their future wife to run away and get married without telling anyone. Whether the courthouse or a greek islandm … always shot down.

See Also:  Are You Following These Relationship Rules in 2014?

The wedding date? I don’t know

At some point we are eventually asked asked so many times that we are forced to remember the date of our wedding. But … there seems to be a long period where we just can’t quite remember which day and which month it all goes down. Not a bad thing … we just got bigger things to remember (like taking over the world n sh*)

Yes, I am still going to the strip club / bar / club / female friend’s house when I get married

Male friends are quick to write a death sentence for anything fun that happened in the life of the soon to be married. It only takes 15 minutes into a conversation with a soon to be married man to hear him having to defend his former way of life. Sad …

As much as we don’t want to get involved, every engaged man has been tasked with helping out the planning. Easiest way to get this done is to ask someone else who just got married or just happens to know of a good person. Sure, this person might know the best baker in the entire town, but who cares. You just need to be able to say you asked!

See Also:  Should You Ever Delete Facebook for Your Relationship?

The planning of a wedding is painful for the groom. Usually he had some idea of something that he wanted or hoped for, but it all gets crushed at some point as he realizes the wedding is just a day for the bride. He might fighe it, but it’s a fight he can’t win. When the crushing reality hits him, he will say he won’t care. He’ll say it to his friends, his family, and if he can take the backlash, even his fiance. But really … he’s defeated.

Me? No I’m not planning a damn thing!

Do you know how much work goes into buying a ring? Do you know how much mental anguish a man goes through in preparing to propose? If you haven’t proposed to a woman, don’t try to sympathize… because you don’t know. In my opinion, not having to plan the wedding is the least that should get.

What is the sh*t you’ve heard? In the struggle too? What are you saying?

tags: engaged engaged black male
previous Right vs Wrong: Black, White, and How We Poorly Assess Our Failed Relationships
next Resting on a legacy: where are the next black leaders?