Last month, twenty-six year old George Zimmerman (shown above from a 2005 arrest photo where charges were later dropped) admitted to shooting and killing unarmed seventeen year old Trayvon Martin in self-defense. Because he looked “suspicious” Zimmerman followed and confronted Martin, despite being told not to by a 911 dispatcher. While some of us may be focused on the African warlord an ocean away, (#Kony2012) maybe we can take a minute to bring some attention Zimmerman’s way, allowing him his due share of infamy. Let’s review the facts. 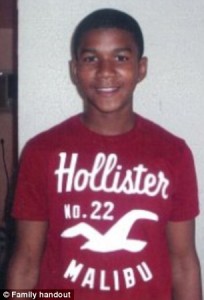 Martin, 17, a high school junior who lived with his mother in Miami, was visiting his father and stepmother at their home in Sanford, a suburb of Orlando, on the weekend of Feb. 26. During halftime of the NBA All-Star Game, Martin’s family said he walked to a nearby convenience store to get some candy for his younger brother. On his way back home, according to reports, he caught the attention of George Zimmerman, a 26-year-old college student and self-appointed captain of The Retreat at Twin Lakes neighborhood watch.

Zimmerman, armed with a 9mm handgun, trailed the boy in his car. At some point, Zimmerman called 911, telling the operator there was a “suspicious person in the area,” according to a police report acquired by HuffPost.

Not long after the call, some sort of altercation ensued between Zimmerman and Martin. Then neighbors said they heard gunfire.

The Sanford Police arrived and found Martin lying face down on a patch of grass about 70 feet from his family’s home, a pack of candy in one pocket and an iced tea in the other.

Today, Zimmerman, the sole survivor of a confrontation he initiated remains free, because Sanford Police have not charged him. What are the officers’ reasoning for not arresting Zimmerman despite his admission to killing Martin?

Tracy Martin [Trayvon Martin’s father] said that when he asked police why Zimmerman hadn’t been charged, officers told him “they respected [Zimmerman’s] background, that he studied criminal justice for four years and that he was squeaky clean.” He continued: “My question to them was, did they run my child’s background check? They said yes. I asked them what they came up with, and they said nothing. So I asked if Zimmerman had a clean record, did that give him the right to shoot and kill an unarmed kid?” – Source.

A squeaky-clean record? Not according to the http://www.dailymail.co.uk. Yes, “uk” as in the United Kingdom. The source of the following information on Zimmerman’s supposedly “squeaky-clean” record.

Mr Crump [the Martin’s lawyer] also called Zimmerman a ‘loose cannon’ and pointed out that Zimmerman was arrested in Orange County in 2005 for resisting arrest and battery of a police officer.

In summary, 17-year-old Trayvon Martin left the house to go to the corner store. He purchased tea and a bag of skittles. Self-appointed neighborhood watch captain, twenty-six year old Zimmerman left the house with a loaded 9mm semi-automatic handgun. Zimmerman called to report Martin as a suspicious person to police, continued to follow him despite the 911 dispatcher advising him to wait for officers, and he made the choice to confront Martin. Zimmerman suffered stained clothes and a bloody nose. An unarmed Trayvon Martin was shot and killed. According to officers, because Zimmerman went to college and has a “squeaky clean” record he was not arrested and as of the date of this posting, he remains at large.

This is an injustice. George Zimmerman should be arrested and face a jury of his peers for his admitted role in the shooting death of Trayvon Martin. There is no other excuse for why this shouldn’t occur. In my opinion, there is no excuse for why this hasn’t already occurred. It’s disgusting. Each day that passes is insulting to the family, the memory and loss of Trayvon Martin, and to everyone who is aware of the facts I have described and sourced above. I hope and believe this arrest will occur sooner than later. Sadly, given my observations of similar incidents in America in recent years, I remain unsure.