Amber Rose, Kim Kardashian and The Truth About Men And Groupies

Anytime we hear about Kim Kardashian, Amber Rose, or any other “I don’t know why they’re famous but they’re famous” women, one word generally pops into many people’s minds: groupie. People often claim these ladies have no real talent, that these reality stars and blue movie stars only date the rich and famous, latching onto their fame in hopes of residual success. Men (who aren’t keeping it all the way real), will say that these women are not ideal mates and that with them, they would never consider a serious relationship. On the flip side, a man who is a “groupie magnet” is considered a red flag for women. I can understand the disdain for women like Kim K and men like Reggie Bush, but in my opinion, the views expressed above are from a jaded and unrealistic standpoint. If we take away personal bias, we can see that there are some intrinsic truths about the groupie culture, truths I’d like to touch on today. 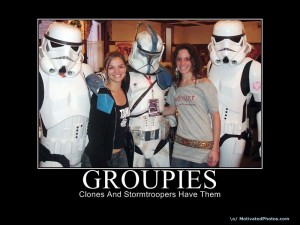 Truth #1: All successful/interesting men have groupies

Groupie love doesn’t end with athletes, rappers, and celebrities. All men of a certain stature have women vying for their affection. Doctors, lawyers, nerds, frat boys, clergymen, politicians, writers, and your favorite coworker have groupies. Disagree? Have you ever been to a NSBE or Congressional Black Caucus conference?! Man listen… I thought I was in the middle of the Sahara with the amount of thirst being displayed! These different groups of men share those admirable qualities which women revere:

A woman may not be desirous of a man’s pockets, but I’m sure 99% of women do not want a broke and fiscally irresponsible man by their side. If they are career woman, they want to know that a man can hold his own with her and contribute to the overall income of the household. If a woman is the stay-at-home type, she wants to know that she can focus her efforts completely on the family, and won’t have to worry about her son making a Ghostface Killah like ballad outlining their struggle. If she is a gold digger, she wants to make it rain without restriction. So women will look at men who are either ballin, stable, or have a great plan to do so.

See Also:  7 Fictional Characters Your Relationship Can Do Without

If you aren’t feeling yourself who else will? Men in those categories all exude an air of excellence about them. They maintain the mindset that they are the sh*t, and won’t hesitate to let their words and actions supplement that theory. Women can smell weakness and inferiority on a man like walkers detect their prey, and will shy away from dudes accordingly. Whether a man is upfront or reserved about their idea of self-worth, their swag is both undeniable and attractive to women.

Women will say that they don’t want a dude in the spotlight, but I don’t think that’s 100% accurate. Women, like men, appreciate a person who is admired and revered by others. Women just don’t want a dude who’s “out there,” or “mixxy” as my skinny jean wearing younger brethren would say. All the categories of men I mentioned above have admirable qualities that give them recognition, respect, and notoriety. Doctors save lives. Rappers end them on mp3s, and use those same mp3s to make soundtracks to our lives. Nerds are admired for their intelligence and clergymen for their speaking ability (boy the gift of gab will get you everywhere). We even wrote a blog here months ago about the struggles of relationship blogging, and how that might affect our dating lives, which correlates to this topic today! Men may not ask for the spotlight, but the spotlight eventually finds those that it deems worthy because others wish it so.

Ladies will swear up and down that another women is a groupie. When I hear this, I like to ask a simple question: “Why do you think she’s a groupie?” Go ahead and ask that next time anyone calls someone out, an watch the reactions on their faces. They will give you a look that screams “well isn’t it obvious?!,” and you’ll get a cliche filled answer such as:

See Also:  In Search of Amber Rose: A Man's Quest For Companionship

“Well…she only dates and hangs around rich & famous dudes. You always see her with a certain type of man. She’s like their mascot, and no one would know who she is if she didn’t hang out with them. She’s basically poppin that thing for sex money and notoriety”

This is the common theme with the groupie argument, and while this is generally accepted, there are flaws to this argument. First of all, when you are a celebrity, your personal life unfortunately becomes public consumption. This is the reality TV era, and the world is enamored with the personal lives of others. When celebrities go to events, or enjoy themselves like you or me, their every move is scrutinized and put on blast. Thing is, a majority of the time famous people are hanging with non celebrities, so is every non-famous woman around them a groupie? Seems a bit presumptuous to assume so in my opinion.

Next, people intertwine groupie with other classifications. I read the quote above, and the phrases “gold digger,” “jump off,” and “thirsty chick” jump out to me. Are these terms synonymous with groupie, or stand alone terms in themselves? To me, those terms are the latter. In his newest ebook “Guide To Jumpoffs” (love that title), Dr. J covers the definition of groupie flawlessly. He says:

She just wants to be in the “in” crowd. She enjoys being in the company of people who have a good time, and will ride the curtails of anyone who has some claim to fame. They are not to be confused with Gold Diggers. The key difference is that a Groupie will follow a group with dedication while not really receiving any benefits outside of association. A Gold Digger has no dedication to the group, only the money source.When the money dries out she will go to the next money source, a groupie will stay dedicated and wants you to pull through tough times.

The chapter goes on to define “gold digger,” “jump off,” and the various hybrids. So when people call a woman a groupie, I think they really mean something else completely. I agree with Docs premise, an by his definition, I’m not sure many women are groupies solely, if at all.

See Also:  The 15 Most Intriguing People in Black America

Truth #3: Women confuse showing love for groupie behavior and will guard against it like the plague.

We have women who will contact the writing team and compliment us for a good post or comment, but won’t do it publicly for fear of being called a groupie. In college, true female friends of mine always thought twice about supporting too many of my frat programs because they didn’t want to be hated on or called out by other women. Meanwhile, the same women who would call others groupies would be seen performing the walk of shame from xyz dorm where coincidentally alll the athletes and frat boys live! Maybe it’s me, but in this situation why would you care about what others think, if you know you’re not a groupie? I understand perception is reality, and women want to make sure they aren’t erroneously classified, but that’s life. Somebody will have something to say about all aspects of your life and make claims whether valid or not. All you can do is be you and carry yourself how you want to be perceived.

I’m not saying that groupies don’t exist. However, when we label anyone, we should be careful of misrepresentation. Hoes be winnin’, but not all of them perform ho activities.

Which brings me to today’s questions. How do you define “groupie” in 2012. Do you think that, as a culture, we’re a little too quick to pass judgment and call folks groupies? Do you have friends or acquaintances who might fit into your definition? Do you call them out on their groupie-ish activities? Any groupies out there willing to admit so be you a man or a woman?

Don’t group me with groupies, I remain group free.