Home Featured SBM Sports: The Five NBA Teams that Could Win It All in 2012
Featured
Sports and Entertainment
March 27, 2012 Joe Sargent 38

SBM Sports: The Five NBA Teams that Could Win It All in 2012 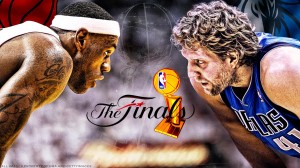 Since my bracket has been balled up in the garbage for a week now, I figure it’s time to move on to the NBA. We have reached the home stretch of the season with roughly 15-20 games left for each team. Now is the time to start handicapping the NBA Playoffs. Who will lift the trophy in June? Here’s a breakdown of the five teams with the best shot:

5. San Antonio Spurs – Yawn. I know. But the Spurs are fourth in the NBA in points per game, and lead the league in 3 point percentage Not as boring as their reputation, right?

The Good: Tony Parker is playing one of the best seasons of his career. The Frenchman is leading the team in points and assists, proving to be elite offensively. Besides Parker, the Spurs have three point shooters galore and a better coach than every other team on this list. The shooters can keep the Spurs in every game, and Coach Popovich will ensure the discipline to execute when needed.

The Not So Good: Age and inexperience. Seems like an oxymoron, but Manu Ginobili and Duncan, two of the Spurs’ leaders, are old and have injury concerns (Manu) or declining production (Duncan). On the flip side, many of the Spurs’ shooters weren’t with the team for their championship runs in the early 2000’s. That relative inexperience could hurt them during crunch time in the playoffs.

4. Los Angeles Lakers – Adding Ramon Sessions at the trade deadline doesn’t seem like a title-shifting acquisition, but he is the perfect addition for this year’s Laker team.

The Good: Before trading for Sessions, the Lakers had a gaping hole at point guard. Derek Fisher and Steve Blake (hereby referred to as Scumbag Steve) were huge liabilities. Sessions adds backcourt stability by scoring and leading the offense better than Fish or Scum could today. Well, like a week ago for Fisher. But that’s beside the point.  In four games with the Lakers, Sessions has averaged more points and assists than Fisher and Blake COMBINED. He’s even earned a spot in the starting line up, despite Coach Mike Brown’s pledge to stick with Scumbag Steve.

The Not So Good: The Lakers still depend on a supporting cast of Metta Worldpeace, Matt Barnes, and Josh McRoberts. Yikes. BUT if their best players have it going, the Lakers are championship contenders.

3/2. Miami Heat/Oklahoma City Thunder – Despite the score of Sunday’s game, these teams are evenly matched. The Thunder get the edge for now, though, based on the win.

For Miami: Pretty much.

For The Thunder: A less famous top three: Kevin Durant, Russell Westbrook, and James Harden(‘s beard), who are almost as productive. Harden will probably be the 6th Man of the Year and has played big minutes as back up Point Guard since the loss of Eric Maynor.

The Not So Good: Each team has a unique problem with turnovers. For the Heat, a large part of their success comes from transition points generated from turnovers. Without them, their halfcourt offense fluctuates from “stagnant” to “hideous” to “vomit-inducing.” The Thunder tends to turn the ball over too much at times. Westbrook is a dynamic point guard, but his decision making, though improved, still fails him sometimes.

1. Chicago Bulls – They have produced as well as the Heat and Thunder without the reigning MVP or several other key players for a combined 59 games.

The Good: The Bulls have a 3 game lead in the East and the inside track on homecourt advantage. The Bulls are great at home (20-4) so that could be a big edge.

The team also boasts the league’s second best defensive rating (points allowed per 100 possessions) and a deep roster with a supporting cast of Luol Deng , Joakim Noah, CJ Watson, John Lucas III (huge during Derrick Rose’s absence), and Omer Asik (defensive anchor of the team’s second unit). Even if Rip Hamilton can’t give the team anything this year, the Bulls will have the most complete team headed to the playoffs.

The Not So Good: While they are 3-1 against the other teams on this list (4 point loss to Miami on the road), they have yet to play Oklahoma City, and still have two games against Miami. This backloaded schedule poses a risk if they drop a couple of those games.

Also, Carlos Boozer, the team’s starting Power Forward, spends many fourth quarter moments on the bench and paints his hairline. Neither of these truths instill confidence that he can deliver in the team’s biggest moments. The Bulls have a great defense, but if they’re in a game where they need points, Boozer hasn’t proven he can take the pressure to score off of Derrick Rose. This killed the team in last year’s playoff series with the Heat.

Are you happy with where your team ranks? Do you think another team deserves consideration? Any key points you think I missed? Let me know!