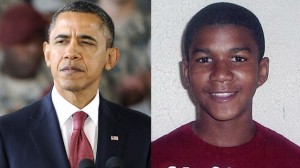 The Trayvon Martin case has garnered national attention in a matter of weeks. SBM was at the forefront of reporting this atrocity, as we informed the SBM community about the details of the case, let you hear the 911 calls, and we even posted photos from the #MillionHoodies march. Our coverage here has helped to educate me on the issues surrounding the case well. I am firm in my position that Zimmerman needs to be arrested and tried for murder. I wanted to see what the prominent US figures had to say on the issue. Sports stars like Amar’e Stoudemire, and LeBron James have taken initiative to show their support for Trayvon. Others like Newt Gingrich and his ilk question Trayvon’s  innocence.  One person who was silent was Barack Obama. You knew that black people would have a field day with his silence. It gets touchy when you get into the federal vs. state affairs with law, so he was prudent at first. When asked about it directly, he gave the following succinct but poignant reply:

All races, nationalities, and organizations have ways to codify their statements, so that only members of that particular group can truly comprehend hidden meanings. Black people are awesome at this skill, and the quote plucked above is 100% proof. being a president, you can’t always be demonstrative and blatant with speech. You have to be shrewd. Obama shrewdly disseminated a message of understanding to all blacks when he gave that statement, that opponents of his would chastise if he could keep it all the way real. There were 3 messages to us, and ultimately to America, that he gave us in the brevity, but powerful words he spoke:

Those could’ve been my kids too
How many horror stories have Black parents heard from their children about being harassed on the street by police for “looking suspicious”? How many black people instinctively drive and fixate their eyes on the rear view mirror in anticipation of flashing lights? How many of those same horrors have parents lived through themselves? It’s a cyclical travesty that occurs to people of color. I personally have experienced racial profiling my entire life. My friends and I, all black professional men, were taking road trips through P.A. headed towards upstate New York (quickest way from NYC). We were pulled over in the same county in Pennsylvania on 2 separate occasions, 2 years apart, by white officers who said “you were speeding and i was following you for over a mile watching you do so.” In this particular county, you wouldn’t find too many cars full of black men, so we were easy to spot. Raise your hand if you’re black and this has happened to you twice. Imagine if that was Trayvon Obama in that Sanford neighborhood walking with hoodie up, snacks in hand, talking to his girl on that cell phone. What if George Zimmerman committed murder against the President’s son? Would he still have walked free? Would Geraldo Rivera stand by his idiotic and obvious inflammatory remarks that Trayvon’s hoodie had as much to do with being murdered as Zimmerman? Obama’s statement on Travyon Martin speaks to my soul as a black man because he told me that he wasn’t so sure. he might be President, but as a black man, he lives that reality that someone could easily disregard his children based off of race.

Prejudice and Racism gives no f*cks about our accomplishments

We shine because they hate us, floss cause they degrade us
We trying to buy back our 40 acres
And for that paper, look how low we a’stoop
Even if you in a Benz, you still a nigga in a coop/coupe – Kanye West

As a black man and a parent, he knows how deep this tragedy cuts the Martin family. When Obama made this statement, he acknowledged that the notion of a post-racial America is a pipe dream. He knows that there are many in our communities that clamor for him to be that galvanizing black leader that we have sought for since Martin Luther King Jr. Some of us more forward and holistic thinking blacks know that he can’t be that leader, as he is the leader of all America. That doesn’t mean that he is ignorant and oblivious to the racism effect that plagues his people daily. He had to make a speech about race during his campaign when tensions ran high. He has even challenged blacks to be better parents and strive for more regardless of the hurdles that closed minds erect on our path. But that message, shrewdly coded to his people, let’s us know that he understands that his biggest detractors, even some of his supporters, can’t get over the fact that “A nigga actually won the election and runs the U.S.A.”. I swear the amount of opposition this man faces politically has more to do with party affiliation. Maybe I haven’t been as politically aware as I am today, but even when Bush was sending us into senseless wars and trillion dollar debt, screaming YOLO, I couldn’t see the amount of venom and blatant opposition to him as President or his ideas other than the norm in Washington. He knows this, lives this, and yet still marches on, as MLK, Malcolm X, and all the civil rights champions of color would have done. The same way he wants Trayvon’s parents, and all Americans, to march on for justice.

I Am Trayvon Martin
Growing up in America, black men learn from society and experience that our lives are considered secondary. We are expendable. No Civil Rights movements, or fallacy of a post-racial America can change this feeling amongst the majority. Whether it’s an inaccurate perception or a blanket indictment on the feelings of White America, but our standings as second class citizens have been embedded into our DNA since we were brought to this country on the slave ships that traversed the middle passage, and the blood, sweat, and tears of our ancestors used to build the foundation for today’s United States of America. In some neighborhoods, making it to 21 is celebrated with extreme jubilance and celebration, not because its a normal milestone in adult life, but because we have beat statistics. Statistics, regardless of their factual nature, which tell us that we will either be dead or in jail before 21. So we celebrate, and thank our blessings that we made it to this milestone age.

I thought that all the I Am [fill in the blank with slain person of color] campaigns were corny at first. Putting this Trayvon martin case into perspective, it hit me closer to home more than usual. I was that 17 year old black kid walking through predominantly white neighborhoods with a bag full of snacks and a dream. Not a dream to rob, steal, or kill, but dreams of celebrating a junk food filled feasts. I dreamed of eating these snacks while taking my biplane to the U.S.S.R. to do battle with Zangief and any one of my comrades who dare stand beside him. I was well versed in the rules of engagement when police thought me to be suspicious. Hell, I could be chillin at a bachelor party and get shot up by law enforcement, or during a routine stop lose my life because my wallet looked like a semi automatic weapon. I was street smart so I knew when trouble beckoned to turn the other direction, but to fear fellow neighbor slay me in the name of justice, is inconceivable, but real. Regardless of perception of how I dress, because you saw Nas or Jay-z wearing something similar on TV, does not give you a license to kill. Because I embrace hip hop culture and emulate it through fashion does not make me culpable or careless or the world around me. If i go into a corporate America job interview, then that is 100% true, but not when i’m walking the streets living life!

Obama told the world that he was, and is Trayvon Martin, in uttering one sentence in a brief statement. Black people understood him loud and clear, whether in subconscious or in plain sight. Black men have had kids that looked like Trayvon Martin for ages. These same kids, with dreams of living life, without cares in the world, have had their lives cut short by bigots and racists, while this country will remain idle until public sentiment forces action. No matter how many degrees we earn, CEO titles we attain, or advances we make as a people, we still will be regarded as dogs.We are Trayvon Martin: minorities who are expendable, and whose lives means nothing.

tags: barack obama Codify racism Trayvon Martin
previous SBM Sports: The Five NBA Teams that Could Win It All in 2012
next Single Sam's Episodes in Love Part 5: All It Takes Is One