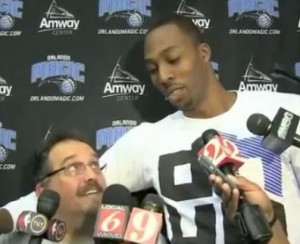 We can all agree on a few things: work sucks, none us are paid enough, and 99% of bosses are idiots. It turns out that last one is true in the NBA as well; at least for Dwight Howard, Carmelo Anthony, and Andrew Bynum. These three players have all had public run-ins with their coaches this season. Thankfully, I’m here to referee these spats and judge them on a few factors: pure entertainment (how interested was Twitter?), legitimacy (did the player have a point?), and outcome (was the result worth the argument?).

Entertainment: This feud has been fun to watch because of the extreme peaks and valleys. Remember the 8-15 start? Linsanity? Melo’s return and subsequent losses? All of these culminated in D’Antoni’s sudden resigning. The Knicks have been fascinating this season; inspiring trending topics, puns galore, and serious discussions about race.

Legitimacy: The Knicks had problems heading into this season. The team’s best player and head coach had very different offensive philosophies. Predictably, the Knicks struggled on offense and their record reflected it (despite an underrated defense). Even with their resurgence during Linsanity (against horrible competition), the problems persisted when Melo returned.

In this case, I side with Melo. D’Antoni is a great coach, but not the right one for this team as it’s constructed today.

Outcome: The Knicks have played better under interim coach Mike Woodson. This includes a big win against the Chicago Bulls on Sunday. Perhaps part of this is a newfound commitment since D’Antoni’s departure. Anthony intimated this saying, “I think in the last three games (under Woodson), my focus was to have an energy that I haven’t had so far this season, especially on the defensive end.” Funny timing, Melo. Though if the result is wins, Knick fans won’t mind.

Entertainment: Bynum has been accused of immaturity in the past, but he’s outdone himself here. It started with the three pointers. He was benched after shooting one in a close game. Next, he joked about it on the sidelines. THEN he refused to join the team huddles during time outs.

Surely Bynum was apologetic afterward, right? Here’s what he had to say for himself:

Since this incident, Bynum skipped a meeting with team General Manager, Mitch Kupchak, to discuss these issues and been fined by the team. Hopefully he continues to be defiant, if only to entertain us.

Legitimacy: Brown has a reputation for lacking tactical in-game coaching skills. That said, he has led the Lakers to the third best record in the Western Conference. Bynum could have picked a better time to act out against his coach. I side with Brown.

See Also:  Do Men Mislead Women Accidentally or on Purpose?

Outcome: Since the infamous three pointer, the Lakers are 5-3. This has more to do with the potentially serious injury keeping Kobe Bryant from playing than Bynum being childish. The Lakers can do well in the Playoffs with a petulant Bynum, not with a hobbled Kobe.

Entertainment: This is easily the most entertaining player/coach feud we will have in a decade. After months of speculation, Van Gundy finally confirmed the widely believed rumor that Howard wanted him fired. He did so at a pregame shootaround, and the result is a candidate for the YouTube Hall of Fame:

This is a video so awkward and hilarious it deserves a breakdown.

2:49 – The hug. Dwight comes in from off screen having no idea that his coach has called him out.

3:07 – SVG/RJ makes his escape. This is like farting in an elevator right before the door opens. Leave that timebomb for the next man to deal with.

See Also:  Find Your Ride Or Die: A Letter To All Ladies

3:27 – The stutter. It’s the moment Dwight realizes the reporters know. We’ve all been there, Dwight. Time to admit it or stick with your lie.

3:33 – Dwight chooses to stick with his lie. Seems very satisfied with himself at 3:40 too

Dwight spends the last minute deflecting questions and “focusing on what’s ahead.” Blah.

Legitimacy: As far as I can tell, SVG/RJ has done a great job with the Magic. The second best player he’s ever coached is…Jameer Nelson? Averaging 55 wins a year and taking those teams to the Finals tells me SVG/RJ can coach. Dwight has no legs to stand on here. He should be mad at the General Manager.

Outcome: Although it’s only been a few days, it’s clear that this has had a negative impact on the team’s play. The Magic were destroyed the night of The Interview by the Knicks, and the NBA on TNT crew did a great job breaking down the reasons why. This has caused a rift that won’t be fixed this late in the season.

Where do you stand on these NBA dramas? Should players have the power to have their coaches fired? How do we know when the players cross the line?

previous Single Black Mail: How Long Do I Wait For Her To Get Over Her Ex?
next Five Things About Men I'll Teach My Son